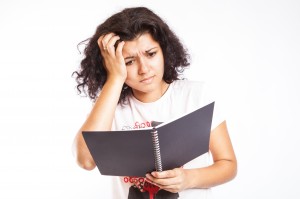 An image of college student vexed by her loan schedule (Flickr, by CollegeDegrees360)

Seoul, July 05 (Korea Biz Wire) The Korean government announced on June 26 measures to relieve the financial burden of college students and graduates who have incurred large amounts of student loans and have difficulties paying them back.

The measure, to be in effect on July 15, is intended to expand the range of those beneficiaries who are eligible for the already-existing low-cost loan program.

According to the measure, the eligibility has been expanded to include those who took out high-rate loans within six months before applying for the government-subsidized program. Previously the applicant must have taken out their loans prior to June 18, 2012. In addition, those younger than 29 years of age who are taking courses in non-accredited educational institutions such as technical schools or vocational training facilities can also take advantage of the newly offered measure.

According to a government-commissioned Gallup survey on 5,037 college students in 2012, 18.3 percent of respondents (922 students) had outstanding student loans, of which 3.7 percent (188) were using high-rate loans. Based on these survey results, one can estimate that there are 110,000 students and graduates paying more than an annual rate of 20 percent and 39,000 who are using private lenders charging exorbitant rates.