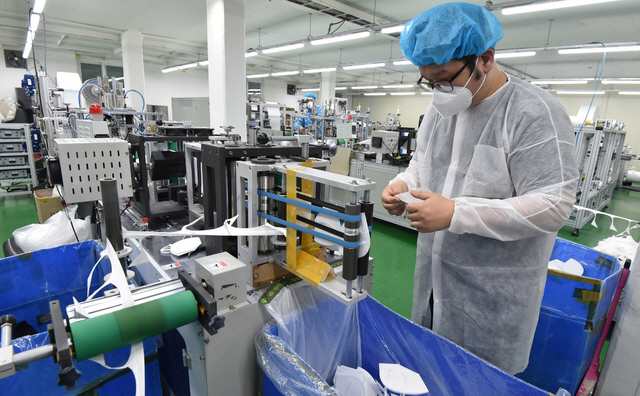 In this file photo, taken on March 9, 2020, a worker checks a production line for masks at a facility in Yongin, just south of Seoul. (Yonhap)

SEOUL, May 19 (Korea Bizwire) — The limit on the number of protective masks that one can send to family members overseas will be lifted as mask supply is stabilizing in South Korea after a major crisis in March, the customs office said Monday.

The Korea Customs Service (KCS) announced Monday that it will increase the number of protective masks that one can send overseas to 36 per shipment, up from 24.

The decision comes after the South Korean government increased the number of public protective masks that each person can buy to three per week, up from two previously.

Those who have already sent 24 masks to families overseas will be able to post 12 additional masks.

The KCS also announced that it will recognize spouses with foreign nationality as family members. Now, for instance, a person residing in the U.S. after marrying a South Korean will be able to receive protective masks.

The decision does not include, however, other foreigners or those who have given up Korean citizenship. The limit is counted based on how many masks a recipient has received, not how many masks the sender has sent.

For instance, a father and a mother can’t each send 12 masks to a daughter who goes to school overseas, because this will mean that a single recipient will be receiving 24 masks.

However, a father living in South Korea can send 12 masks each to a son and a daughter studying overseas.

After restrictions on sending protective masks overseas were partially lifted in March, approximately 2.2 million masks had been shipped overseas as of May 12.