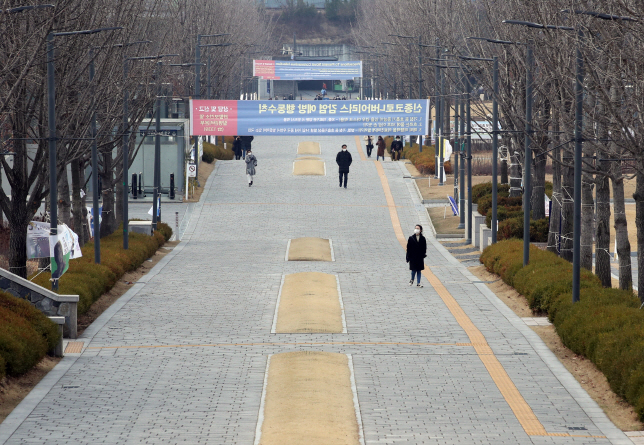 A road inside Seoul’s Yonsei University is deserted on March 2, 2020, as the school has postponed the start of the spring semester until March 16 amid concern over the spread of the new coronavirus. (Yonhap)

President Moon Jae-in received a briefing on the scheme, details of which will be made public on Thursday, according to Cheong Wa Dae spokesperson Park Kyung-mee.

Under the plan, households in the bottom 80 percent income bracket are expected to receive full college tuition support starting with their third child.

Those categorized as poor, by the standards of the government’s welfare service, will benefit from the program beginning with the second kid, she added.

Earlier in the day, Cheong Wa Dae said all South Korean families with three children or more would benefit from the program but it corrected the announcement a few hours later.

The government also decided to drastically raise the value of scholarships to those in the lowest income brackets, Park said, but did not share details of the rate of planned increase.

The administration has been working on presenting a special youth policy on five major areas — education, living, welfare, social participation and basic rights — aimed at tackling youth-centered problems stemming from the pandemic and offering support for the growth of future generations.

Moon said the tuition support scheme for multi-child families was “encouraging” and noted that students would be able to benefit from the plan as it did not require law revisions and that related budgets have already been reflected in next year’s state budget.

The government plans to announce the policy on Thursday through a special youth policy coordination committee chaired by Prime Minister Kim Boo-kyum.