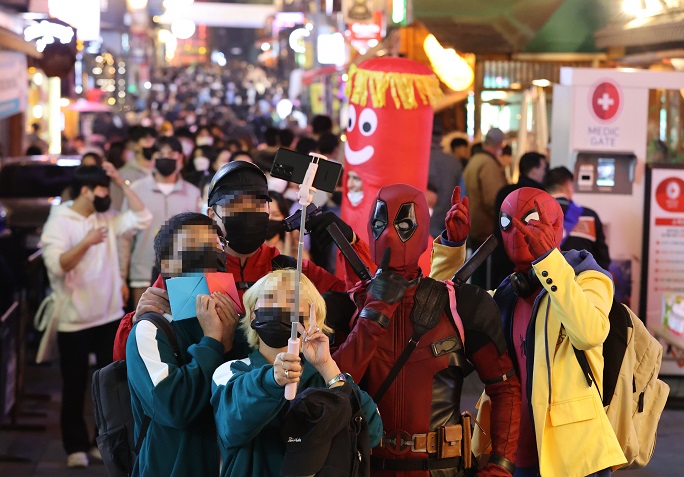 A street in Itaewon, a popular nightlife district in Seoul, is crowded with people on Oct. 29, 2021, two days before Halloween, as South Korea is set to gradually ease COVID-19 restrictions and return to normalcy. (Yonhap)

SEOUL, Oct. 31 (Korea Bizwire) — The government will deal sternly with violators of COVID-19 rules during the Halloween weekend and foreigners will be no exception, the interior minister said Sunday.

Halloween falls on Sunday this year.

“The government and local governments have been carrying out joint patrols in areas frequented by foreign nationals and visited by multiple people,” Jeon said, referring to a weeklong patrol period that ends Tuesday.

He said the authorities have also been conducting a campaign to discourage people from gathering.

“With regard to foreign nationals who are caught violating antivirus rules, we plan to take strict measures in accordance with relevant laws,” he added.

South Korea is set to begin a phased return to normal life on Monday, starting with the lifting of curfews on restaurant hours and allowing private gatherings of up to 10 people in the capital area and up to 12 in the rest of the country.

Jeon said cluster infections continue to be reported across the country and that concerns persist over an increase of cases amid the return to normal.

He called for continued adherence to social distancing protocols, such as mask wearing and regular ventilation.