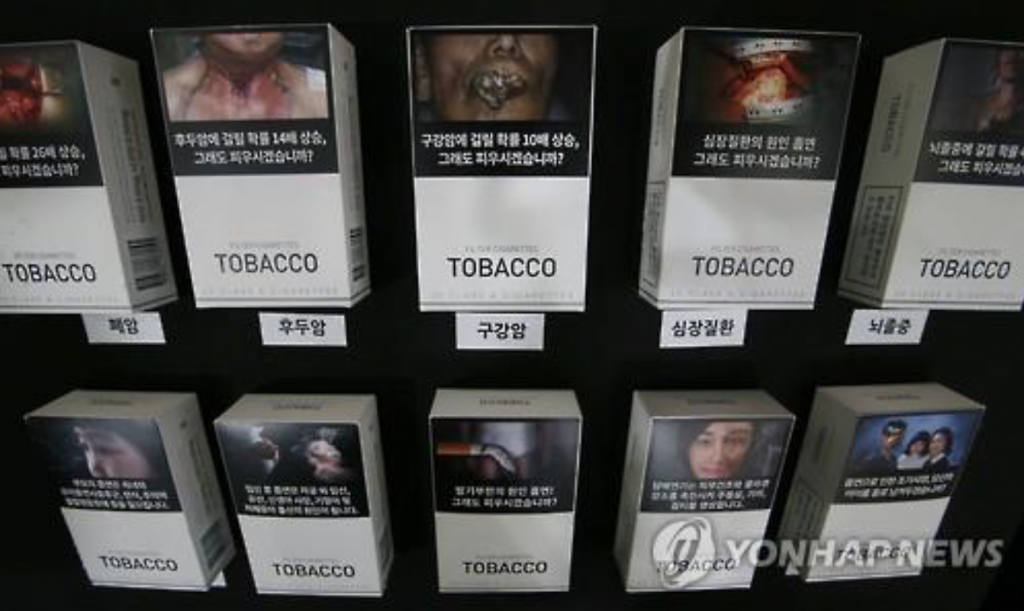 This photo taken on March 31, 2016, shows 10 graphic health warning labels which will appear on all cigarette packets sold in South Korea from Dec. 23, 2016. (image Yonhap)

SEOUL, June 22 (Korea Bizwire) – Most cigarette packs sold in South Korea will carry graphic health warning labels on them starting on Dec. 23, in a move to promote people’s health, the government said Wednesday.

The government has recently passed a law to introduce a total of 10 graphic health warnings to be placed on the upper part of both sides of a cigarette packet. The photos are required to cover more than 30 percent of both sides of a packet, according to the Ministry of Health and Welfare.

“All cigarette packs have to carry one of the 10 designated full-color and disturbing photos alongside warning texts on adverse health effects of smoking,” a ministry official said.

When the graphics and text are put together, they are required to account for more than 50 percent of each side of a cigarette packet, he said.

The graphic warnings show smokers suffering from fatal diseases such as lung cancer, oral cancer, laryngeal cancer, heart attack and stroke, while warning of serious side effects like second-hand smoking, smoking by pregnant women, sexual dysfunction, skin aging and premature death, according to the ministry.

Under the law, the photos will be replaced every 24 months and a notice about the next 10 photos will be announced six months ahead of the replacement, it said.