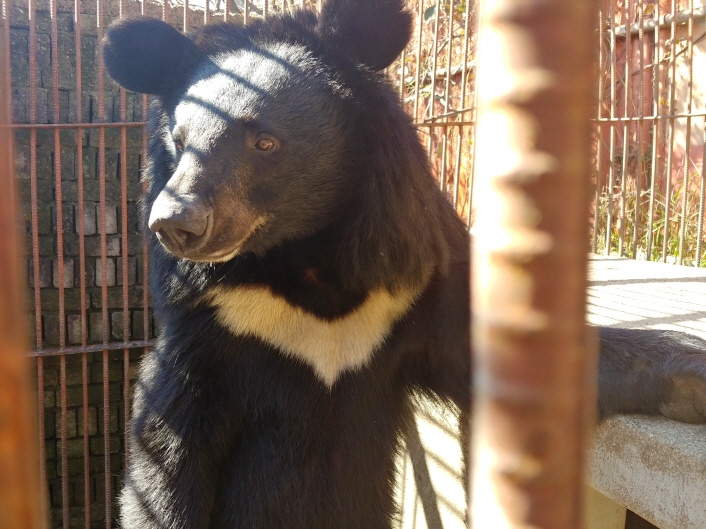 The bears are known to be descended from Asian black bears that were brought to the nation following a government policy to import the animals before exporting them at higher prices. (image: Green Korea United)

SEOUL, Nov. 26 (Korea Bizwire) — A rescue mission to free Asian black bears currently being raised for their gallbladders will kick off early next month.

Green Korea United, an environmental activist group, announced its purchase of three Asian black bears, a species on the brink of extinction, held captive at a farm in Gangwon Province.

The NGO plans to send two bears to a zoo in Cheongju and the other to a zoo in Jeonju. Bae Je-seon, an official at Green Korea United, said that the organization had crowd-sourced 40 million won(US$35,500) online to purchase the three bears.

“After staying at various zoos, the bears will be relocated to protection facilities to be built by the National Institute of Ecology in 2020 or 2021,” said Bae.

The three bears, all reportedly born in 2014, will be able to leave their cages for the first time since they were born. Before the bears are moved to zoo facilities, they will undergo a health checkup on Wednesday.

The bears are known to be descended from Asian black bears that were brought to the nation following a government policy to import the animals before exporting them at higher prices.

The measure was aimed at boosting farmers’ profits but ended abruptly following public outcry regarding the protection of the endangered species. The remaining bears were bred for their gallbladders.

In 2014, the government banned the breeding of black bears as public sentiment against the practice continued to grow. At present, only around 540 such caged bears remain.

Meanwhile, the Ministry of Environment has been importing wild bears from Russia and China to release around Mt. Jiri in hopes of restoring the bears to their natural habitat, an ironic move considering the hundreds of home-bred Asian black bears across the country that are presently confined to cages.

Green Korean United says it will continue to raise funds to save Asian black bears held in captivity.