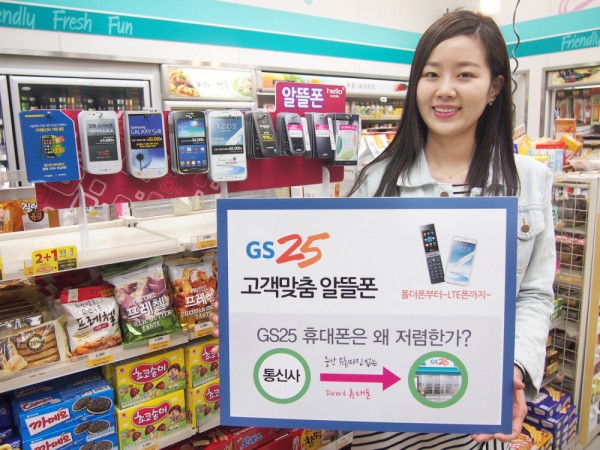 According to GS25, run by GS Retail, on June 26, its sales of MVNO phones have reached 14,000 units during the 56-day period from May 1 to June 25. Comparing to the sales performance in May and June last year of selling only 6,300 phones, this is a 120-percent growth.

A mobile virtual network operator (MVNO), or mobile other licensed operator (MOLO) is a wireless communications services provider that does not own the wireless network infrastructure over which the MVNO provides services to its customers. An MVNO enters into a business agreement with a mobile network operator to obtain bulk access to network services at wholesale rates, then sets retail prices independently. An MVNO may use its own customer service, billing support systems, marketing and sales personnel or it may employ the services of a mobile virtual network enabler (MVNE). (Wikipedia)

In particular, the figure represents more than an eight-fold jump compared to 800 sold in December 2012 when it started selling the phones.

The type of MVNO phones preferred by consumers has also changed. The sales ratio between conventional mobile phones and smartphones stood at 72:28 in May 2013. This ratio, however, switched to 36:64 in May 2014, thanks to the introduction of affordable smartphone rate plans and easier access to MVNO smartphones at convenience stores.

For example, Annex Telecom, an MVNO firm, offers a Samsung Galaxy Ace Plus phone in a rate plan of 7,800 won a month without an additional phone device charge.

Subscribers to this two-year plan can enjoy the service that includes 100-MB free data and KT Wi-Fi. Another MVNO carrier CJ HelloMobile gives away a Samsung Galaxy Core smartphone at the cost of 14,000 won a month.