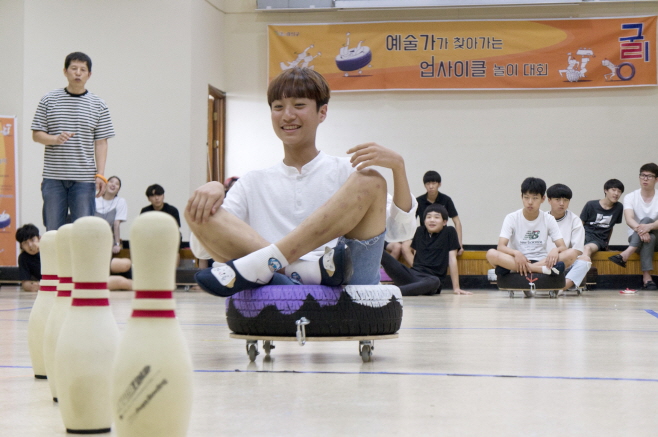 GWANGJU, Jul. 18 (Korea Bizwire) — Gwangsan District in Gwangju will hold a Gulingpic on Saturday at Honam University, where it will stage various games making use of “guling” discarded waste tires.

Guling’s Olympic Games, Gulingpik, will be divided into three areas: speed, strength and how freely one slides the tire.

Guling is a youth culture, art, and play education policy in the mining district using discarded tires as a tool. The name was coined with the Korean word ‘roll’ as a stem with ‘curling’ added to its stem.

Lee Ho-dong, who works as a resident artist at the house of youth culture, developed the game in 2017.

Like a cushion, the writer attached wheels to the underside of a worn-out tire and borrowed the method of curling, a winter sports game.

Since then, it has been used in a variety of games, including guling train and guling bowling.

After going through a cleaning process, eco-friendly paint is applied to areas of the tire that touch or sit on the floor to reduce exposure concerns such as environmental hormones.

There are also cases of amusement development in the Netherlands and other foreign countries that recycled discarded goods such as parts for power generation facilities, steel drums and abandoned vehicles like guling.