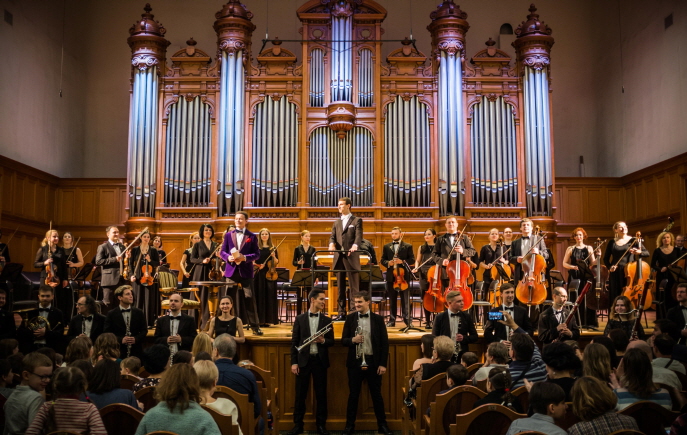 A performance by the Moscow State Symphony Orchestra. (image: Organizing committee of the 2019 FINA World Championships)

GWANGJU, Jun. 19 (Korea Bizwire) — A variety of cultural events are to take place in Gwangju in the coming weeks ahead of the opening of the 2019 FINA World Championships in the southwestern South Korean city next month, municipal officials said Wednesday.

Gwangju, 330 kilometers south of Seoul, is gearing up to host the biennial FINA World Championships from July 12-28. FINA is the French abbreviation of the International Swimming Federation.

Among the many celebratory cultural events planned in Gwangju, the Moscow State Symphony Orchestra, a world-renowned Russian orchestra, plans to hold a concert at the May 18 Democracy Square at 8 p.m. on Saturday, according to the officials.

The orchestra plans to perform famous songs by Verdi and Tchaikovsky under the baton of Noh Tae-cheol, a Korean professor now serving as vice chancellor of an institute of music in Russia.

Noh also served as the first Asian conductor at the Vienna Walzer Orchestra in Austria in 1996.

Fringe and street festivals transcending genres and styles will also take place in Gwangju. The fringe festival will offer performances of various genres, such as music, mime, busking and circus, as well as experience programs for citizens visiting the May 18 square.

A national dog swimming race will be held at Chosun University this weekend.

On the eve of the FINA championships, a citizens’ harmony festival will be held featuring K-pop performances.

During the championships, the May 18 square and the athletes village will also host a variety of festive events, including performances, exhibitions and dancing competitions.

On top of that, the Asia Culture Center plans to hold a world music festival, a robotics performance and an Asian culture market.