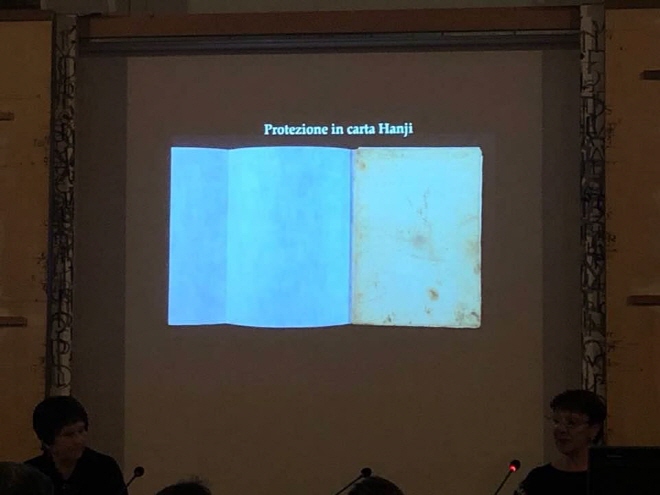 Under the title of “Leonardo and his secret”, ICPAL held a conference at its headquarters in central Rome for two days from December 10, announcing the results of the restoration project for some of Da Vinci’s works. (image: Yonhap)

ICPAL, an international organization dedicated to the restoration and conservation of cultural heritage, announced on December 11 that it had decided to use hanji in the restoration of the “Codex on the Flight of Birds” (in Italian: Il codice sul volo degli uccelli), presumed to have been created by Da Vinci in 1505.

“Codex on the Flight of Birds” is currently stored in The Royal Library of Turin, located in northern Italy.

It is an 18-page hand-written note that describes the aeronautical engineering law Da Vinci discovered while observing birds, and it is widely regarded as an insightful and advanced work for the time.

Under the title of “Leonardo and his secret”, ICPAL held a conference at its headquarters in central Rome for two days from December 10, announcing the results of the restoration project for some of Da Vinci’s works.

The project was conducted over the past two years and included the restoration of “Self-portrait” by Da Vinci.

As one of the speakers on the day, Lucilla Nucetelli, a restoration expert at ICPAL, described the restoration work on “Codex on the Flight of Birds”.

She explained that “the work endured a long time and was heavily contaminated with mold after being displayed at various sites”, and added, “In order to thoroughly protect and preserve the original piece, hanji will be used to cover the original.”

“Hanji will be used to make covers to protect the original and its use is to minimize the damage caused by time”, Nucetelli continued.

She also revealed that ICPAL had chosen hanji for its “tougher and stronger quality than ordinary paper.”

Hanji can last for centuries and is made with natural ingredients. Hanji can also harmonize with the original work in color and material.

It is said such quality of hanji influenced the decision of ICPAL on using the paper to finalize the restoration of “Codex on the Flight of Birds”.

Shinhyeon-se Hanji workshop in Uiryeong, South Gyeongsang Province, will provide hanji that will be used for restoration.

Three hanji papers produced by this workshop were certified as suitable for the restoration of cultural assets in 2016 and this year by ICPAL.

This is the first time to that hanji will be used to restore work from Da Vinci. It once again proves the potential of Korean paper to play a significant role in restoring the world’s valuable cultural assets.

The Royal Library of Turin, which currently houses the work, is reportedly planning to introduce the restored “Codex on the Flight of Birds” to the public on the 500th anniversary of the death of Da Vinci next year.

Meanwhile, ICPAL has used hanji to restore five major cultural assets including “Chartula” in late 2016 and continued to use hanji ever since. “Chartula” is an asset containing a handwritten prayer by St. Francesco, a Catholic saint, 800 years ago.