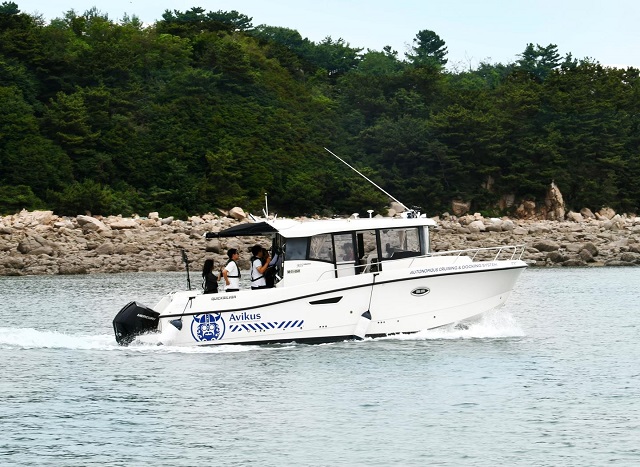 This file photo taken July 12, 2022, and provided by Avikus, a unit of South Korea’s leading shipbuilding group, HD Hyundai, shows a leisure boat equipped with its autonomous navigation system at Wangsan Marina in Incheon, around 30 kilometers west of Seoul.

Avikus has signed a deal with two domestic firms — SK Shipping Co. and Sinokor Merchant Marine Co. — to gradually supply the Level 2 autonomous navigation solution to 23 ships operated by the shippers, the company said in a statement.

The deep learning-based HiNAS 2.0 system will allow a vessel to respond to unexpected situations on its own. Controlling speed, avoiding collisions and minimizing fuel consumption will also be possible in the system, it said.

There are four levels in autonomous navigation technologies approved by the International Maritime Organization (IMO). In the Level 2 technology, crew members need to be on board to intervene in case of an emergency situation.

A Level 3 vessel does not require crew members and the remote-control system is available in case of an emergency. At Level 4, a boat’s automated features can navigate under any conditions.

The autonomous navigation system market is currently in its infant stage, and Avikus is aiming to sell the Level 2 system for leisure boats starting next year, the statement said.