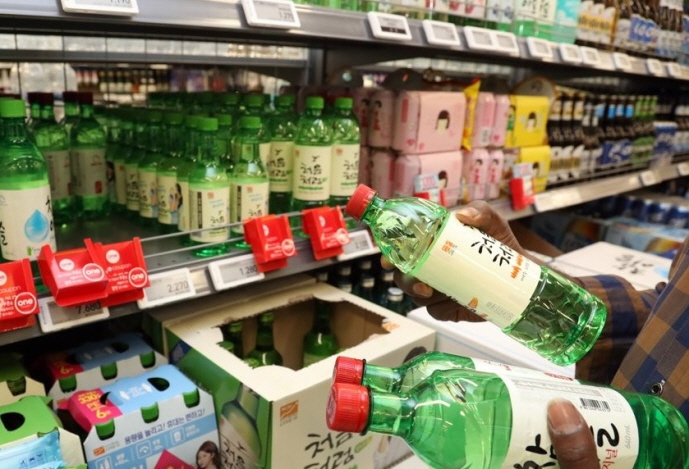 Bottles of soju, a rice-based liquor popular with local drinkers, are on display at a hypermarket on May 1, 2019. (Yonhap)

SEOUL, Nov. 5 (Korea Bizwire) — The government is considering plans to ban liquor manufacturers from using photos of female celebrities to promote their products.

The Ministry of Health and Welfare announced on Monday that it will consider amending rules to ban liquor manufacturers from including pictures of female celebrities on liquor bottle labels to prevent the glamorization of alcohol.

Since the late 1990s, South Korean liquor manufacturers have been locked in fierce competition, recruiting popular female celebrities to promote their brand as models.

Chamisul, a soju brand from HiteJinro Co., has been promoted by stars like Lee Young-ae, IU, and Irene, a member of South Korean girl group Red Velvet.

Among Organization for Economic Cooperation and Development (OECD) member countries, however, South Korea turned out to be the only country with photos of female celebrities on liquor bottles.

Experts argue that while there are many problems surrounding drinking culture in the country, government efforts to encourage moderation in drinking have been relatively light compared to the government’s policy against smoking.

While both cigarettes and alcohol are Group 1 carcinogens that can cause cancer, hypertension, and other serious diseases, the government has been blamed for taking a different approach towards each of them.

For 2019, the government allocated 139 billion won (US$119 million) to run a nationwide policy against smoking, while the budget for various programs to prevent harmful effects of alcohol was 1.3 billion won.

There is a separate government division that is fully devoted to anti-smoking programs, while there are none for alcohol prevention.

“Celebrities inspire children and teenagers, and encourage consumption, so at the very minimum, we should refrain from using celebrities to promote liquor brands,” said Rep. Nam In-soon.