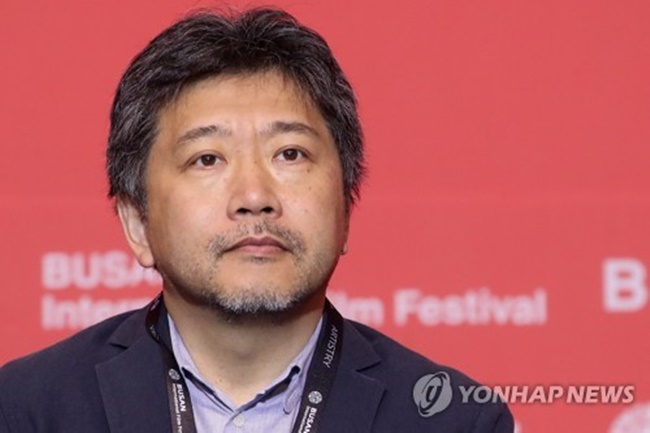 Japanese auteur Hirokazu Kore-eda listens to a question from a reporter during a news conference announcing his plan to executive produce “Ten Years Japan” during the 22nd Busan International Film Festival on Oct. 16, 2017. (Image: Yonhap)

“Ten Years Japan” will compose an international omnibus film project along with “Ten Years Thailand” and “Ten Years Taiwan,” which are already filming in their respective locations.

The original “Ten Years” was a dystopian anthology of five short films by young Hong Kong directors which envisaged how Hong Kong would change 10 years into the future.

The indie project made a sensation at local cinema houses, beating “Star Wars: The Force Awakens” at the local box office when it premiered. It later opened in Canada, Germany, Britain, Australia and the United States, but has been banned in China for spreading a dystopian vision of Hong Kong.

“The Hong Kong project was terrific and I think it would provide viewers a chance to think about Asia after 10 years together,” Kore-eda said during a news conference announcing the plan at the 22nd Busan International Film Festival. “I hope this Japanese spin-off would provide the country’s up-and-coming young directors a chance to participate in international film festivals and interact with Asian filmmakers.”

Kore-eda, however, jokingly said that he is joining the production as a supporter because he is “a little too old to participate.”

The Taiwanese segment will be directed by James Liu, Rina Tsou, Lau Kek Huat, Lekal Sumi and Pei-Ju Hsieh. They will address such topics as environmental disasters, exploitation of immigrant workers and the declining birth rate.

Kore-eda is best known for his films “Like Father, Like Son,” “Our Little Sister” and “After the Storm,” all screened at the Cannes Film Festival.

The new film anthology is set to open next year.