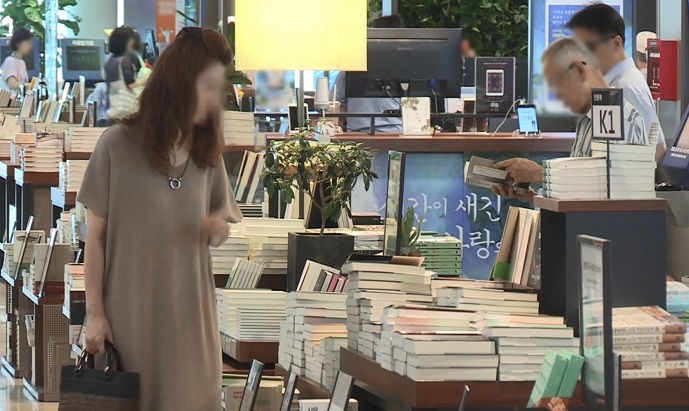 This photo provided by Yonhap News TV shows a bookstore.

SEOUL, Nov. 3 (Korea Bizwire) — The South Korean government said Tuesday that it will keep the current fixed book price system, which is aimed at helping local publishers stay afloat, nearly unchanged but will ease some discount regulations for customers.

Under the government-led fixed price system, which was first launched in 2003 and refreshed in 2014, the price of a book is determined by publishers, and online retailers are allowed to give a maximum 15 percent discount on all books published 18 months ago or more.

It was introduced to help local publishers survive the intense competition against large online bookstores who had churned out discount coupons in the early 2000s.

The government has reviewed the system every three years to check its feasibility in a timely manner.

“Considering the fixed price system’s positive effects on the ecosystem of the publishing industry, we will maintain the system nearly intact but will fine-tune some details,” the Ministry of Culture, Sports and Tourism said in a release.

It said bookstores and retailers will be able to reset the resale price of books 12 months after publication, down from the current 18 months.

The government will also update the nationwide publication distribution networking system to help local publishers register the price changes in an easier and more timely way.

For electronic publications such as webtoons, moreover, retailers can set the price tag with their own electronic cash unit.

But the government will strengthen punishments for those who violate the pricing system multiple times. A fine of 5 million won (US$4,400), up from current 3 million won, awaits anyone caught as a third-time offender.

The culture ministry said it will have its ear to the ground to keep up with the fast-changing publication industry and meet the demands of customers.

The revision will be finalized after being discussed and passed at the parliament.