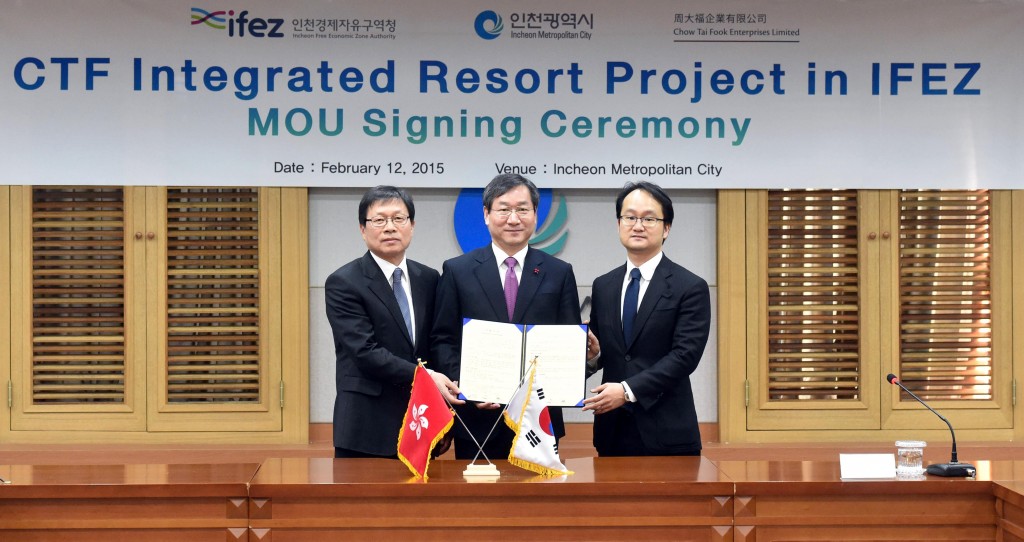 CTF group and the Incheon Free Economic Zone signed an MOU in which CTF will invest US$2.6 billion to build a resort complex including a casino for foreigners in Midan City on Yeongjong Island. (image: Incheon Metropolitan Govenment)

SEOUL, Feb. 13 (Korea Bizwire) — Chow Tai Fook Enterprises of Hong Kong has decided to invest US$2.6 billion, the largest ever foreign direct investment in Korea, at Yeongjong Island in Incheon by 2022. With the group’s backing, the island is expected to be reborn as a casino resort complex.

On February 12, the CTF group and the Incheon Free Economic Zone signed an MOU in which CTF will invest US$2.6 billion to build a resort complex including a casino for foreigners in Midan City on Yeongjong Island, home to Incheon International Airport.

The Hong Kong’ global resort operator will build the resort complex, including a foreigner-only casino and hotel, shopping, convention and entertainment facilities at the 94,121 square meter site in two stages, with work scheduled to be completed in 2022.

A joint venture between Korea’s Paradise, Japan’s Sega Sammy and a consortium of U.S.-based Caesars Entertainment and Lippo has already announced their intent to develop a resort complex including casinos on the island. In total, approximately US$6 billion is expected to be invested in casino projects on the island. Incheon estimates that their investment will result in some US$30 billion in economic spinoffs for the local economy.

An official at Incheon Metropolitan Government said, “CTF increased its investment to US$2.6 billion from US$1 billion, which shows that the company is very interested in the Midan City project.”