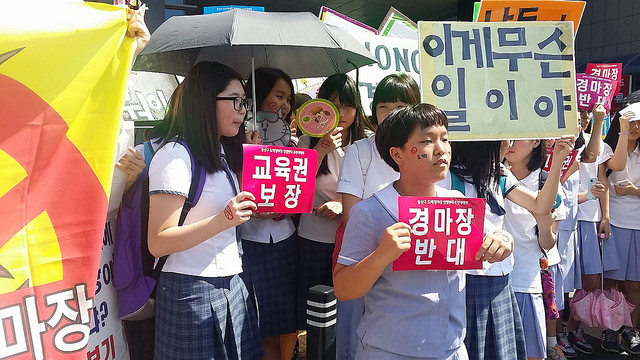 The residents of Yongsan protested its relocation contending that it may have negative impact on the children and the quiet residential environment. (image: PSPD/flickr)

SEOUL, July 23 (Korea Bizwire) – Park Won-soon, Seoul City Mayor, asked the Korea Racing Authority to suspend the business of a horseracing betting center in Yongsan, near Seoul’s downtown, arguing it harms the educational and residential environment in the area.

Park who visited Yongsan residents who were taking a sit-in strike against the betting center on July 20 said, “It is the Seoul Metropolitan government’s firm stance that the pleasant educational environment and quiet residence should be protected from the gambling establishments like the horseracing betting outlet. The KRA failed to get consent from the residents for the relocation of the center and should stop operating it.”

The KRA planned to relocate the betting center from close to Yongsan Station to the current place near Yongsan Electronics Market by expanding its facilities. It began test operation since June 28.

However, the residents of Yongsan protested its relocation contending that it may have negative impact on the children and the quiet residential environment. Near the betting center, an elementary school, a middle school and a high school are located.

As Seoul Mayor Park reconfirmed the city government’s position against the relocation, controversies over the horseracing betting center will set more fire. Further, Park plans to relocate other gambling facilities in downtown Seoul to suburban areas in light of the harmful effects of the gambling establishments.

However, as the local governments have no authority in licensing those gambling shops, it is not clear whether the KRA would stop its operation.