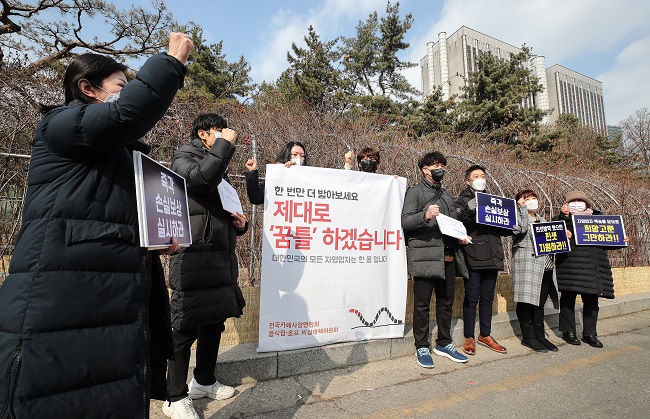 Owners of cafes and restaurants hold a press conference at outside the Seoul Central District Court in southern Seoul on Feb. 19, 2021, before filing a compensation suit against the government. (Yonhap)

SEOUL, Feb. 19 (Korea Bizwire) — More than 200 owners of cafes and restaurants sued the government on Friday over losses caused by COVID-19 business restrictions.

The plaintiffs — 170 cafe owners and 70 restaurant owners — said they are seeking 1.2 billion won (US$1.08 million) in compensation from the government.

The lawsuit, which was filed with the Seoul Central District Court, is the second of its kind. The first one was lodged last month by a group of 358 coffee shop owners seeking 5 million won each.

“Ever since the restrictions were enforced on Nov. 23, we have cooperated with the antivirus policies, but all we are left with is an unbearable amount of debt,” a member of a cafe owners association said during a press conference outside the court, referring to the date dining in at cafes was banned.

“At first we struggled with policies that were not evenly applied across business sectors, but now (the government) is dividing the cafe industry (along regional lines), between the capital area and the non-capital area,” he said.

Under the latest social distancing guidelines, which were updated Monday, cafes and restaurants in the capital area can offer dine-in services until 10 p.m. while those in the rest of the country are under no curfew.

The cafe owners said the government’s emergency relief handouts only increased their desperation and anger at a time when they are forced to sell furniture in their shops and lay off staff in order to survive.