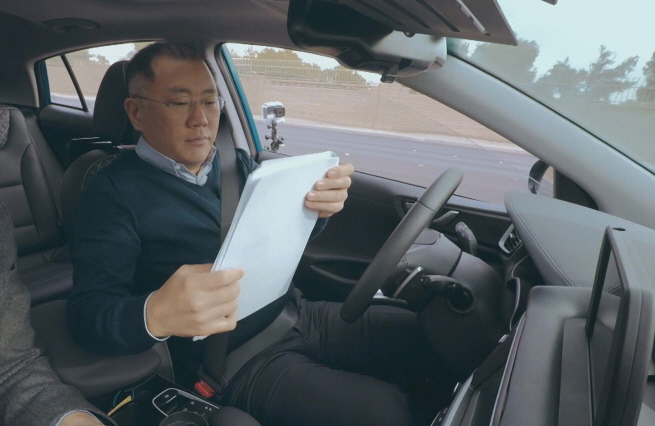 In a luncheon meeting with Korean correspondents in New York on Monday (local time), the group’s Executive Vice Chairman Chung Eui-sun said Hyundai aims to begin production of driverless vehicles in 2024 after completing the test of an autonomous vehicle platform, Hyundai said.

“We expect the era of autonomous vehicles to come early but it will be possible for customers to go anywhere they want in a driverless car after 2030,” Chung was quoted as saying.

To take the lead in autonomous vehicles, Hyundai Motor Group announced Monday it will set up a $4-billion joint venture with Ireland-based autonomous vehicle startup Aptiv next year to develop a self-driving platform.

Hyundai’s decision to work with Aptiv to form the 50:50 joint company, to be headquartered in Boston, is in line with the group’s efforts to morph into a future mobility solutions provider.

The combination of Aptiv’s advanced Level 4 and 5 self-driving automation technologies and Hyundai’s engineering and R&D capabilities could generate great synergies for both companies, allowing them to lead the world’s “autonomous driving ecosystem,” Chung said.

Since Level 3 cars are only capable of limited self-driving, the driver must be present to take control of the car if the need arises.

In the past decade, Hyundai Motor has strongly pushed the hydrogen initiative as it seeks to become a leading player in the next-generation vehicle markets.

In December, Hyundai announced that it will invest 7.6 trillion won (US$6.7 billion) in hydrogen car-producing facilities and related R&D activities by 2030.

Under the plan, the carmaker will establish two separate plants to churn out 500,000 hydrogen vehicles in 2030. A hydrogen car is considered to be environmentally friendly since it emits only water vapor as it generates electricity.

Hyundai sold about 2,400 Nexo hydrogen cars in global markets as of the end of July.