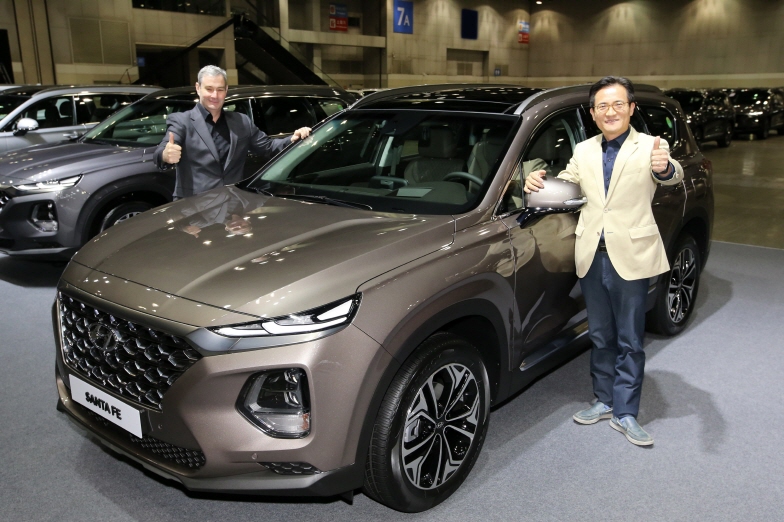 The target was announced by the carmaker at the official launch event for the vehicle and comes as the South Korean carmaker needs the new SUV to bolster sales not only at home but in key overseas markets like the United States.

The fourth-generation of the midsized SUV has a new and unique fascia, with daytime running lamps positioned above the headlights and a more masculine “cascading grille.” It comes with a choice of engines including a 2.0-liter diesel, a 2.2-liter diesel and a 2.0-liter gasoline turbo engine, all mated to an eight-speed automatic transmission, the company said in a statement.

The new Santa Fe is equipped with a full-time HTRAC all-wheel drive system, and the company’s rack-mounted motor-driven power steering is touted for giving very good feedback of the road to drivers as well as precise and well-weighted handling, it said.

The upgraded SUV carries advanced technologies and premium options that have already been used in luxury models, the company said. This, it stressed, raises the value proposition of the car to a new level.

Technologies to be incorporated in the vehicle include advanced driver assistance systems and a host of safety features such as safe exit assist (SEA), rear occupant alert (ROA) and rear cross-traffic collision avoidance assist systems, the company said.

The SEA and ROA technologies have been developed by the Korean carmaker and are the first of their kind to be introduced in a car anywhere in the world.

The SEA makes an alarm sound when a passenger departs from the vehicle if a car is approaching from behind. The ROA alerts the driver if a passenger is in the rear seat, a feature designed to prevent parents from accidentally leaving children in a car that might become dangerously hot inside.

On the overseas front, Hyundai said it plans to launch the top-selling SUV in the U.S. before the summer holidays begin to take advantage of booming local demand for SUVs.

“The model to be available in the U.S. will be gasoline-powered. The sale of the new model will decide the company’s overall sales figure this year,” a company executive said without elaborating.

Hyundai suffered an 11.5 percent on-year decline in U.S. sales last year to 685,555 vehicles due to a lack of new models, particularly SUVs.

To help revive sales, Hyundai will begin selling the Kona subcompact SUV in the world’s most important automobile market next month. Hyundai has the Santa Fe, Kona, and Tucson SUVs in its sedan-heavy lineup.

In 2018, it aims to sell a total of 4.68 million vehicles with overseas sales of 3.97 million units, slightly higher than the 4.51 million units sold the previous year.