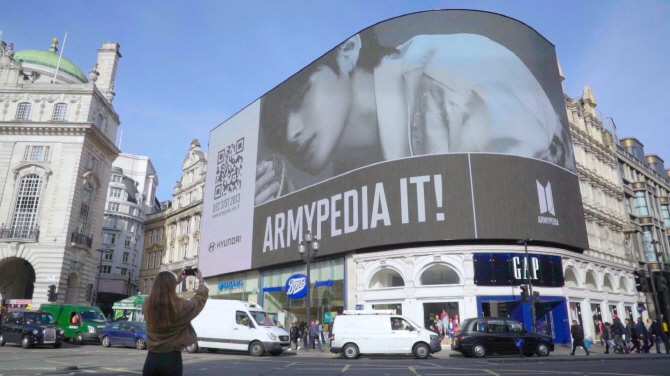 On Friday, BTS began to air a teaser of the K-pop band’s global campaign in London’s Piccadilly Circus aimed at informing its fans worldwide of its plan to launch the site www.armypedia.net. Hyundai Motor provided sponsorship for the campaign, Hyundai said in a statement.

The same teaser video will also be released in six other cities — Seoul, Los Angeles, New York, Tokyo, Paris and Hong Kong — with Hyundai not providing sponsorship in the other locations, it said.

Armypedia is a combined term of the boy band’s official fan club Army and Wikipedia, the free online encyclopedia.

The website is designed to collect all data involving the boy band’s musical performances and events from the band’s debut on June 13, 2013, through Feb. 21, 2019, the statement said.

In November, Hyundai appointed BTS as global brand ambassadors of its flagship Palisade SUV. The band used the Palisade in February when they attended this year’s Grammy Awards in Los Angeles as award presenters, a first for a South Korean group.

In September, BTS also gave a speech on empowerment and love at the United Nations headquarters in New York City.