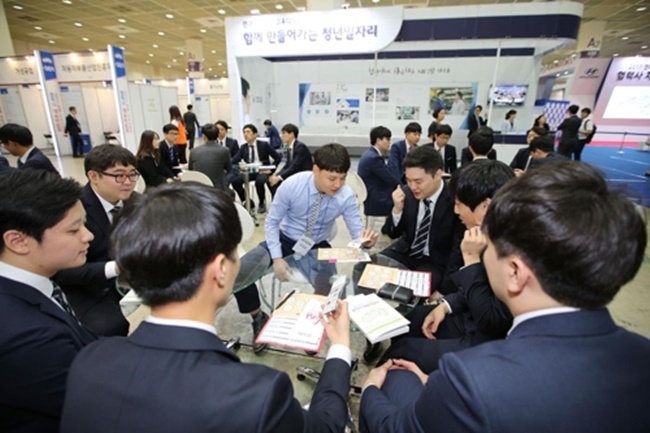 In this photo taken on May 29, 2017, jobseekers wait their turn for interviews with subcontractors of Hyundai Motor and Kia Motors in a job fair held at COEX exhibition hall in southern Seoul. (Image: Yonhap)

In the past five years, Hyundai and Kia have arranged job fairs to help their subcontractors hire a total of 80,000 workers, an average of 16,000 a year. They have also operated an online recruiting program for subcontractors, Hyundai said in a statement.

This year, 241 partner companies of the country’s two biggest carmakers attended the 6th job fair held at the Convention and Exhibition Center in southern Seoul on Monday. The same job fair is also scheduled to open in major cities, including Daegu, Gwangju and Ulsan from June to July, it said.

In a win-win partnership, Hyundai and Kia, which together are flagships of the world’s fifth-biggest automotive conglomerate, have steadily moved to establish manufacturing bases in overseas markets, along with their parts suppliers.

The carmakers have expanded their overseas plants and their suppliers have also built plants that contribute to a stable supply of parts.