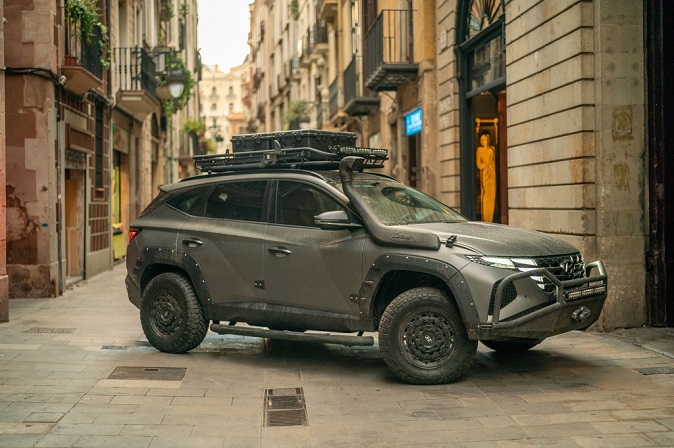 This photo, provided by Hyundai Motor Co. on Feb. 4, 2022, shows a scene from “Uncharted,” an American action-adventure film, in which the South Korean carmaker’s Tucson Beast off-road concept drives on a street in Barcelona in its debut.

SEOUL, March 17 (Korea Bizwire) — Sales of Hyundai Motor Co. and its affiliate Kia Corp. in Europe surged more than 20 percent on-year last month on the back of the popularity of environment-friendly models, industry data showed Thursday.

Hyundai sold 37,032 vehicles in the European market in February, up 25.5 percent from a year earlier, and Kia enjoyed sales growth of 24.8 percent by selling 39,149 units, according to the European Automobile Manufacturers’ Association (ACEA). Combined, their sales rose 25.1 percent on-year.

The strong showing came as total auto sales in Europe fell 5.4 percent on-year to 804,028 vehicles amid a prolonged chip shortage.

The performance is driven by the popularity of their electric vehicles. The two major South Korean carmakers sold 12,161 EVs combined in Europe last month, up 80.8 percent from the previous year, according to the data.

The sales growth boosted their share in the European passenger vehicle market by 2.3 percentage points on-year to 9.5 percent in February, with Hyundai accounting for 4.6 percent and Kia taking up 4.9 percent, the data showed.

Compact SUV Tucson was the best selling model among Hyundai vehicles, followed by Kona and i20. Among Kia models, Ceed was sold the most, followed by Sportage and Niro.