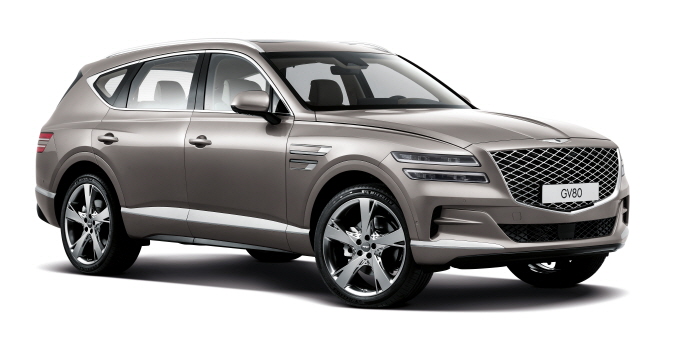 This photo provided by Hyundai Motor shows the front and side of the Genesis GV80 SUV.

The GV80 is the fourth model of the Genesis lineup, which is currently composed of the G70, G80 and G90 sedans.

“The Genesis’s first luxury flagship SUV GV80 comes with differentiated design and cutting-edge technologies that are not available in existing SUV models. It is focused on satisfying consumer needs for safe and convenient driving,” Hyundai Motor President Lee Won-hee said in an unveiling event in Ilsan, just north of Seoul.

The three-row, rear-wheel-drive SUV is equipped with a 3.0-liter diesel engine and various advanced features for safety and convenience, the statement said.

It also has electronically controlled suspension with road preview, alerting the driver to road conditions ahead using cameras and navigation systems.

It has 10 airbags including a central airbag that expands into the space between driver and passenger seats to prevent head injuries to the driver and front passenger.

Hyundai is offering a build-to-order program named Your Genesis in which customers can select the type of engine, driving system, color and options for their own GV80s.

The diesel-powered GV80 has a starting price of 66 million won (US$57,000), with prices rising to up to 89 million won depending on options.

The GV80 appears to have price competitiveness in the local luxury SUV market, where it aims to compete with BMW’s X5, Mercedes-Benz’s GLE, Audi’s Q7 and Volvo’s XC90.

Hyundai Motor plans to introduce the GV80 in the U.S., the world’s most important automobile market, in the summer of 2020. It intends to add an electric model to the Genesis lineup next year.

The Genesis lineup will comprise six models — three sedans, two SUVs and one all-electric car — by the end of 2021. The second Genesis SUV model is widely expected to be based on the G70 sedan. 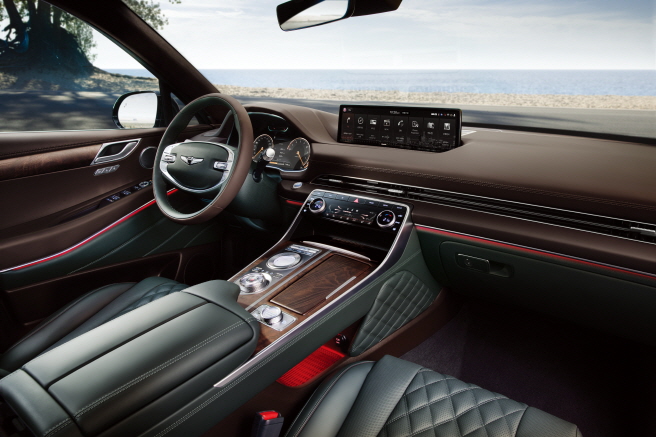 This photo provided by Hyundai Motor shows the interior of the GV80 SUV.

“We will offer multiple options for alternative propulsion in the future, and we plan to launch our first EV by the end of 2021. We are continuing to work on alternative propulsion solutions and the right opportunities to introduce them to the Genesis lineup,” Mark Del Rosso, chief executive officer of Genesis Motor North America, told reporters during the CES tech expo held in U.S. last week.

Signature Genesis design elements include high-tech quad lamps and a crest grille that emphasizes “seriousness consistent with the positioning of the GV80,” Hyundai said.

The G-Matrix pattern in light fixtures throughout the exterior, as well as the design of the wheels, was inspired by the orchid shapes cast by light passing through diamonds, it said, adding that the interior of the GV80 focuses on “the beauty of open space” and was inspired by the South Korean architectural aesthetic.

It has a minimalistic design, with a commanding driving position surrounded by high mounted control surfaces. Slim, wide air vents highlight the width of the cabin, which features minimal physical buttons and a new touch-screen climate control.

The center console is equipped with a jewel-like, rotating electronic gear selector, providing a balance of simplicity and glamour, the company said.

Looking ahead, Hyundai said it will put a bigger focus on selling more SUV models, including the all-new Tucson and face-lifted Santa Fe, in the U.S. market.