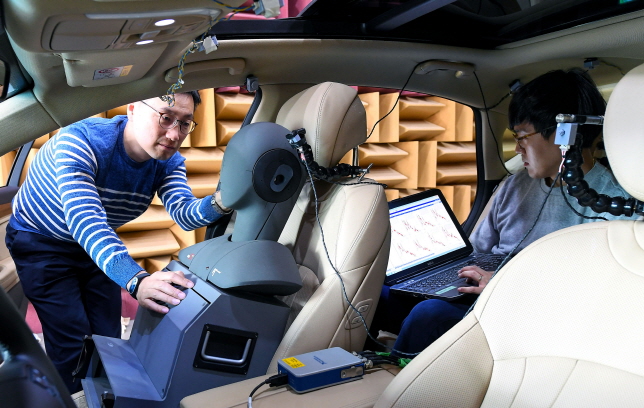 The RANC system reduces indoor noise by 3 decibels, the effect of which is easily recognizable by ear. (image: Hyundai Motor Group)

South Korea’s top automaker announced on Monday that it has completed a 6-year journey to develop its Road Noise Active Noise Control (RANC) system, which prevents road noise from entering the car.

The company said that it has submitted related patent applications in South Korea and the United States.

The RANC system reduces indoor noise by 3 decibels, the effect of which is easily recognizable by ear.

The technology conducts real-time analysis of various kinds of road noises coming from all directions, and emits soundwaves inverted to incoming noise through car speakers, ensuring a quiet indoor environment.

Hyundai took an open innovation approach to work with universities, including the Korea Advanced Institute of Science and Technology, and collaborated with U.S. automotive electronics firm Harman International Industries Inc. in the production phase to maximize product quality.

The carmaker plans to include the RANC system on the GV80, a new Genesis model.

The company explained that RANC’s combination with hydrogen cars, relatively more exposed to road noise due to a lack of noise from the combustion system, will be very effective.