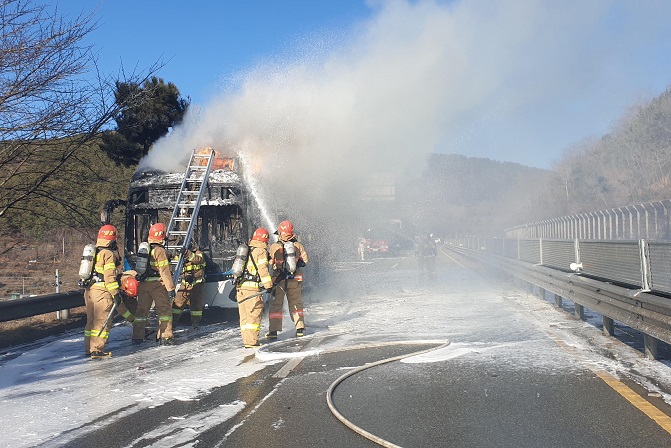 Firefighters put out a fire on a Hyundai Motor Co. electric bus in Changwon, about 400 kilometers southeast of Soul, on Feb. 15, 2021, in this photo provided by Changwon Fire Station.

SEOUL, Feb. 16 (Korea Bizwire) – A fire broke out on a Hyundai Motor Co. electric bus, the latest in a series of accidents involving the company’s electric vehicles, but no one was hurt, authorities and company officials said Tuesday.

The accident happened on Monday when the battery mounted on the bus roof caught fire on the road shortly after a maintenance check on its battery system at a garage in Changwon, about 400 kilometers southeast of Seoul, according to police.

No casualty was reported in the incident as there were no passengers at the time, the driver reported to police.

Hyundai Motor and the state-run Korea Automobile Testing & Research Institute (KATRI) will jointly conduct an investigation into the cause of the fire on the bus called Elec City, which was manufactured in 2019, a company spokesperson said.

“The ministry has requested the KATRI to investigate the fire on the electric bus,” said an official at the Ministry of Land, Infrastructure and Transport. “(Investigators) will look into whether the fire occurred within or outside of the battery cell.”

KATRI will also see whether there is any connection between the electric bus and Hyundai Kona EVs topped with batteries from LG Energy Solution, the ministry official said.

The latest accident came as Hyundai Motor is waiting for the result of a joint probe into Kona Electric’s battery fires, which is expected to come out later this month.

In October, Hyundai Motor carried out a voluntary recall of 77,000 Kona with LG’s batteries after 14 cases of fires in the model were reported at home and abroad since 2018.

The automaker upgraded the battery management system of Kona EVs to improve their safety, but a fire on a recalled vehicle last month raised questions over its recall measures.