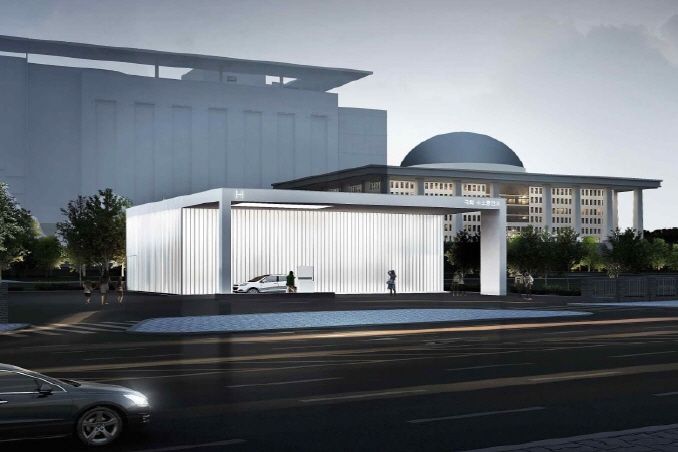 A bird’s-eye view of hydrogen charging station in parliament. (image: Ministry of Commerce Industry and Energy)

SEOUL, Feb. 11 (Korea Bizwire) — South Korea on Monday said it will allow Hyundai Motor Co. to set up a hydrogen charging station in parliament for fuel cell electric vehicles in a symbolic gesture that underscores Seoul’s commitment to boosting the hydrogen economy.

Hyundai Motor, the world’s first mass-producer of hydrogen fuel cell electric vehicles, has also been given the green light to install two other hydrogen charging stations in southern Seoul.

The decision “will serve as an occasion to open the floodgates of regulatory innovation,” Sung Yun-mo, minister of trade, industry and energy, said in a news conference at a government building in central Seoul after holding a first review of new business models that are eligible to take advantage of a “regulatory sandbox.”

“We will create a testing ground for innovation to make sure that regulations do not hold back the market launch of innovative products and new technologies.”

A regulatory sandbox is a concept that allows small-scale, live testing of innovations by private firms in a controlled environment under the regulator’s provision.

The decision came three days after President Moon Jae-in called for efforts to successfully introduce a regulatory sandbox system for the country.

National Assembly Speaker Moon Hee-sang hailed the decision, saying the parliament will be at the forefront of cutting unnecessary red tape and securing a new growth driver.

Moon also called the hydrogen charging station in parliament “a symbol of cooperation” among the government, parliament and private sector to advance the era of fuel cell electric vehicles, according to the ministry.

The ministry said hydrogen charging stations in Seoul could boost convenience for hydrogen fuel cell electric vehicle drivers and help the spread of the zero-emission vehicles while allaying “vague” public safety concerns about the use of such stations.

In January, South Korea said it will increase the number of hydrogen fuel cell electric vehicles to about 80,000 units by 2022 as part of a broader effort to give a boost to the hydrogen economy.

The hydrogen charging station is set to be built in the National Assembly by July and will be capable of providing hydrogen for more than 50 fuel cell electric vehicles a day, according to Hyundai Motor and the Ministry of Trade, Industry and Energy.

Currently, there are only 16 charging stations for hydrogen fuel cell electric vehicles across South Korea.

South Korea plans to set up to 70 additional charging stations this year before boosting the number to 310 by 2022, the ministry said.

Related to the move, the government is moving to make changes to existing enforcement ordinances around June to allow hydrogen refueling stations to be built in commercial and semi residential areas.