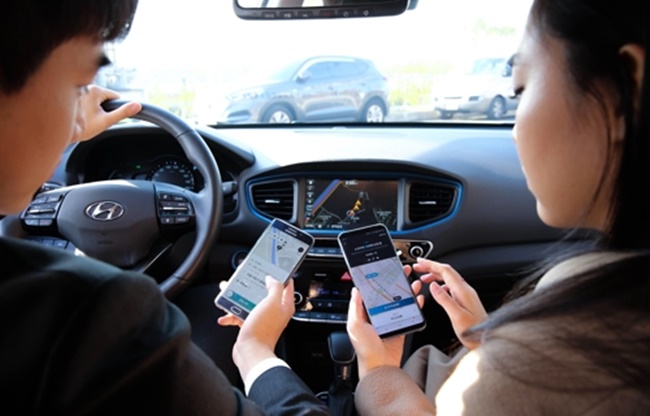 The automaker signaled its foray into the carpool service market on Tuesday, after making a public announcement of Project Ioniq, a joint future mobility research project with Luxi to develop a carpool algorithm and system. (Image: Hyundai Motor)

The automaker signaled its foray into the carpool service market on Tuesday, after making a public announcement of Project Ioniq, a joint future mobility research project with Luxi to develop a carpool algorithm and system.

Luxi is an industry-leading startup boasting around 200,000 registered vehicles and a sizeable user base of 780,000. Since its establishment in 2016, the service has helped facilitate over 4 million carpool arrangements, and the success of the company was met with a 5 billion won investment from Hyundai Motor in August.

Through the new joint project, the two companies will be working together to develop a comprehensive future mobility system, combining the sharing economy with innovative technology such as autonomous driving and artificial intelligence.

To begin with, Hyundai Motor and Luxi will trial a carpool program which is available on a limited basis for only 100 people who purchased Ioniq Hybrid cars.

With the intention of acquiring their own car with the help of carpool neighbors, the trial program by the two companies will help scores of consumers take out a lease on Hyundai Motor’s Ioniq Hybrid and help owners profit from a carpool commute service, with the proceeds going towards the lease fees.

Luxi will be responsible for the operation of the program, which will be available during weekdays from 5 a.m. to 11 a.m. and 5 p.m. to 2 a.m.

‘Smart carpool matching’ technology was developed for the trial program, and can monitor the commuting patterns of drivers through the a data link in the Ioniq Hybrid, while the information collected by the matching system will help find the most lucrative and effective ‘carpool partners’.

In addition, the two companies are set to work on other projects including ‘RobotCab’ and unmanned delivery vehicles.

Those who wish to participate in the event can visit the official website to file an application.

According to Hyundai Motor, commuters in Seoul and the Gyeonggi area, where carpool services first took off in the country, will be given priority.