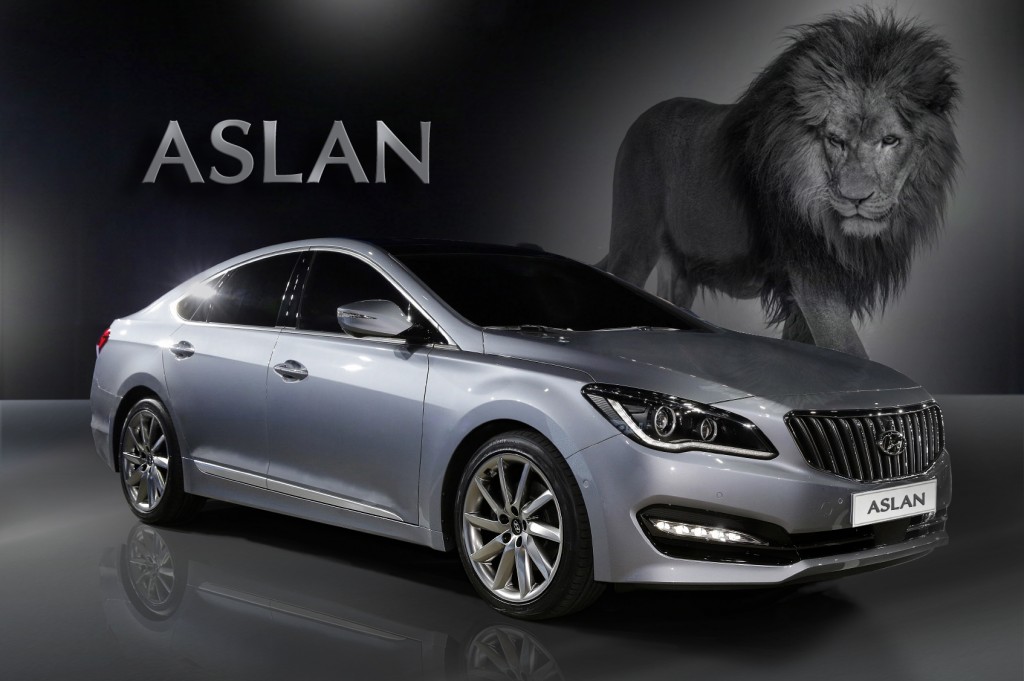 One can feel the car’s imposing figure and splendor from a far and will immediately associate the image of a gallant mane-waving lion. (image: Hyundai Motor)

SEOUL, Aug. 26 (Korea Bizwire) — Hyundai Motor announced on August 25 that it has decided the name for the new-concept premium sedan which is planned to be launched in the latter half of the year, as “Aslan.”

“Aslan,” which means lion in Turkish and the name of the main character in C. S. Lewis’s The Chronicles of Narnia series, represents the concept of its new luxury car, “classy and majestic new-concept premium sedan,” a Hyundai Motor official explained.

The exterior design of the Aslan, which has been already revealed in the Busan Motor show held in last May, has implemented “Fluidic Sculpture 2.0″ (design based on water-flowing lines), which is Hyundai’s unique design identity, to succeed the automaker’s family look and boasts grand and luxurious appearance.

One can feel the car’s imposing figure and splendor from a far and will immediately associate the image of a gallant mane-waving lion.

Based on the years of consumer research and through intensive tuning process and driving performance tests that lasted over months, Hyundai Motor has put efforts to meet the needs of its target customers and achieve comfortable driving experience and luxurious interior.

The company explained that the quietness that the vehicle entails, which is a result of their work to eliminate the overall noise and the vibration in driving, suffer nothing by comparison with top-class luxury sedans in the market.

Korea’s leading automaker is expecting that its unique sedan will bring sensation to the domestic car market in the latter half and create whole new demands and thereby strengthen its market position.

The official added, “We have devoted our heart and soul to making the Aslan with detailed analysis of market and customer needs. The Aslan will present lion-like composure, valor and self-esteem to its owners.”