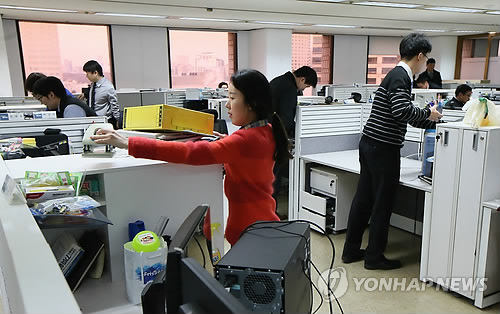 On February 2, Hyundai WIA, the auto part subsidiary of the group, nested 60 workers from its Seoul office at the former KEPCO headquarters. (image: Yonhap)

SEOUL, Feb. 3 (Korea Bizwire) – To revitalize a struggling commercial area near the former KEPCO headquarters site in Seoul, Hyundai Motor Group plans to transfer employees from some of its subsidiaries, who currently work at different locations, to the KEPCO building.

The world’s fifth largest automobile manufacturer plans to move 1,000 workers in the metropolitan area to Samseong-dong, Seoul. On February 2, Hyundai WIA, the auto part subsidiary of the group, nested 60 workers from its Seoul office at the former KEPCO headquarters, and other workers will settle at the building by the end of May.

The conglomerate bought the 79,345-square-meter plot of land in southern Seoul for a staggering 10.55 trillion won (US$9.63 billion) in September last year, and plans to set up a 115-story building that will reach a height of 571 meters, and will be made up of offices, a convention center, hotel and shopping area.

Following the land purchase, Hyundai’s move into Samsung-dong was expected to start in 2022 at the earliest, as the construction of the new building is expected take at least 7 to 8 years. However, Chung Mong-koo, chairman of the group, decided to move some staff earlier to revitalize the nearby commercial area, which fell into a slump after KEPCO workers moved their new headquarters in Naju, on the southwestern tip of the Korean peninsula, last December.

In addition, the group decided not to run a cafeteria inside the building, instead urging its workers to use restaurants nearby, in a bid to boost the local economy. Some subsidiaries, including Globis, plan to allow workers to use meal coupons at the restaurants.

As Hyundai Motor employees are moving in earlier than expected, local business owners are welcoming the “co-existence project” as their fortunes are on the upswing, following initial difficulty after the departure of KEPCO.

A restaurant owner said, “After KEPCO moved out, I was almost bankrupt as our sales volume was cut in half. However, now I see hope as Hyundai is moving in early and had decided not to run a cafeteria.” 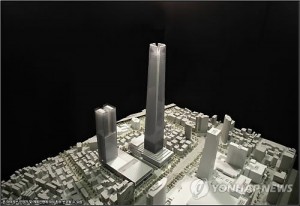 Hyundai plans to set up a 115-story building that will reach a height of 571 meters, and will be made up of offices, a convention center, hotel and shopping area. (image: Yonhap)

Meanwhile, Hyundai is expected to skirt the corporate income recirculation tax with the planned building and convention space, as the new building will be considered as work-related real estate, which allows the conglomerate to claim exemptions under the new tax scheme that aims to push companies to spend excess profits.

Under the tax system, if a company does not spend a certain proportion of its profits on new investment, dividend payments to shareholders or in wages, it can be slapped with a 10 percent tax on earnings.

Hyundai is expected to complete the transaction for the KEPCO site by September 2015, and will likely start construction in January 2017.