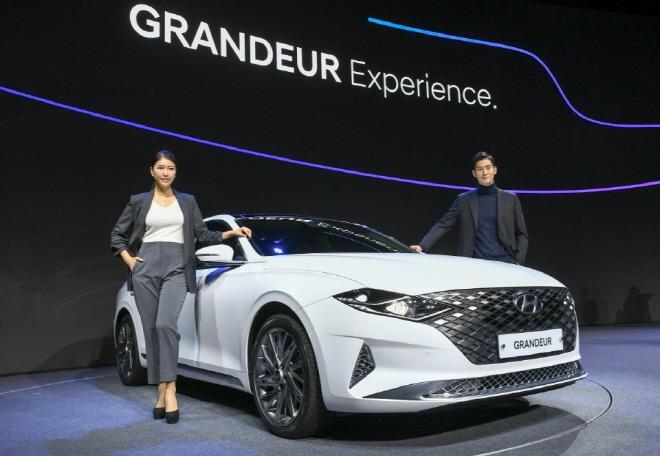 SEOUL, Jan. 24 (Korea Bizwire) — Hyundai Motor Co. and its labor union are in talks for an increase in production volume of the Grandeur sedan to meet rising demand for the face-lifted model launched late last year, the company said Friday.

“The company and the union are in talks to produce more Grandeurs as increasing output volume of a vehicle is subject to approval from the union under the collective agreement deal,” a company official said over the phone.

The current output volume of the Grandeur falls far short of meeting higher demand for the model and its planned exports, he said, adding it is most urgent to supply a new vehicle on time.

In November, Hyundai launched the wider and longer flagship Grandeur and aims to sell 110,000 units in the domestic market in 2020.

Grandeur sales jumped 26 percent to 13,170 vehicles in December from 10,419 units the previous month.

Some 43,000 units of the ordered Grandeurs have yet to be delivered to customers, with some customers required to wait more than three months for delivery, according to local media.

Currently, Hyundai churns out 9,000 Grandeurs a month at its plant in Asan, South Chungcheong Province. It reportedly is considering increasing the Grandeur volume by 3,000-4,000 units a month.

The Hyundai flagship sedan sells at the starting price of 33 million won (US$28,000), with the price going up to 37 million won depending on options.

The upgraded Grandeur comes in four versions with a 2.5-liter gasoline, a 3.3 gasoline, a 2.4 gasoline hybrid or a 3.0 liquefied petroleum injected engine.

Hyundai drastically changed the design of the new Grandeur and added cutting-edge safety features to satisfy the changing appetites of customers in their 30s and 40s.

Hyundai applied the FCA-JT technology for the first time to the upgraded Grandeur. It helps prevent collisions with vehicles that come in front when turning left at intersections.

Hyundai also adopted its “Sensuous Sportiness” design for the face-lifted model of the sixth-generation Grandeur that was launched in November 2016.

Sensuous Sportiness is defined by the harmony between four fundamental elements in vehicle design: proportion, architecture, styling and technology.