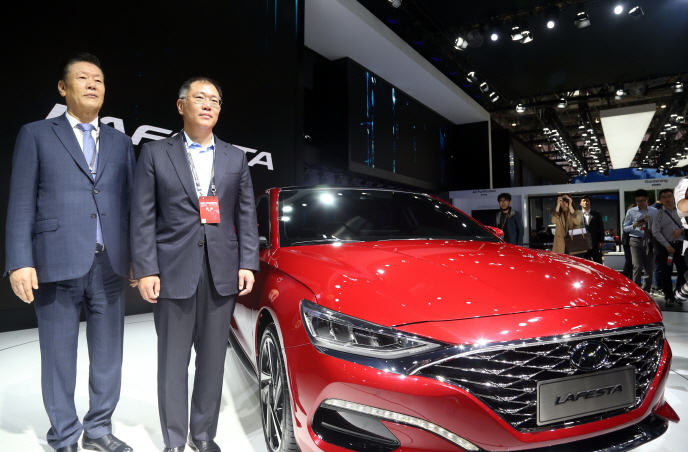 The milestone was reached 16 years after the company entered the key neighboring country, which has since become the largest market for new cars in the world.

Hyundai first sold the midsize Moinca, a localized version of the Sonata, in the first year, which was followed by the Elantra. By 2008, it had increased its lineup to six, with sales up till then exceeding 1 million units. In 2013, the carmaker said it sold 1 million vehicles in the world’s most populous country, with some 5 million cars being sold overall.

Up till 2016, annual car sales exceeded the 1 million mark, although this plunged 31.3 percent on-year to 785,000 units in 2017, amid a diplomatic dispute over the deployment of a U.S. missile defense system in South Korea.

For 2018, the carmaker and market sources said Hyundai sales edged up 0.6 percent from a year earlier to a little over 790,000, with numbers for this year not looking too promising in the face of slowing growth.

By model, various local versions of Hyundai’s Avante compact cars like the Yuedong were best-sellers in the country, followed by subcompact models, such as the Verna. Yuedong sales exceeded 1.36 million units.

Hyundai said that while last year’s growth was small, the Chinese market as a whole actually contracted 6 percent from 2017, a sign that the South Korean carmaker did not do poorly.

The sales decline is the first time in around two decades that Chinese car sales have fallen compared with the year before.

In regards to this year’s forecast, a market analyst at Hana Financial Investment Co. said the trade friction with the United States and slowing down of the economy will invariably affect sales.

NH Investment & Securities Co., on the other hand, said that while the move by Beijing to reduce its subsidies for electric vehicles (EVs) will affect sales of such eco-friendly cars, the demand for such cars has reached the point where state support will be less important.

Hyundai conceded that market conditions were not favorable but said it will strive to expand its presence by launching SUVs like the new ix25 and the Santa Fe. Crossovers have made up 36 percent of all vehicles sold in the country, the carmaker said.

In addition, Hyundai said it will increase its EV and hybrid lineup in the country from the current three to six to better meet consumer demand.

“There are challenges yet Hyundai aims to move forward by developing and launching greener and connected cars in the critical country,” a source for the carmaker said.