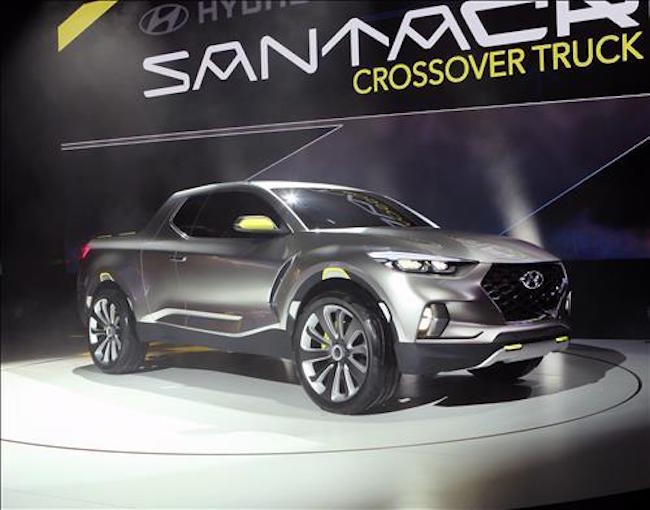 “We have not made any decision on the manufacture of a pickup truck in the U.S. but are considering whether to locally produce the vehicle (for the reasons mentioned above),” a company spokesman said over the phone.

Hyundai’s plan to roll out a pickup truck made in the U.S. now appears to be a more feasible option for the carmaker as Seoul and Washington have agreed to extend U.S. tariffs on Korean-made pickup trucks to 2041 by 20 years from the previously set 2021.

To produce an all-new model at its U.S. plant, Hyundai doesn’t need to seek approval from its labor union. For existing models, the carmaker has to obtain approval from its workforce that may be affected by such a move.

The maker of the Sonata sedan and Santa Fe sport-utility vehicle has pushed forward with a plan to develop a pickup truck for the U.S. market after unveiling the Santa Cruz truck concept at the Detroit Motor Show in 2015. Producing the cars in the North American market can allow it to skirt high tariffs that Washington imposes on imported pickup vehicles.

Hyundai has been hesitant in the past, as the U.S. pickup truck market is a highly brand-loyal segment that is dominated by brands such as General Motors Co. and Ford Motor Co.

Among Asian automakers, Japanese carmakers, such as Toyota Motor Corp. and Nissan Motor Co., were quick to enter the U.S. pickup truck market but have not been able to catch up with segment leaders.

For Hyundai, it is critical to diversify its product portfolio by adding new models, such as a pickup and sport-utility vehicles, for long-term survival in the world’s most important vehicle market, analysts said.

In the January-February period, Hyundai’s sales in the U.S. fell 12 percent to 87,337 vehicles from 99,527 units a year earlier, according to the company.

Under the tentatively revised bilateral free trade agreement between the two countries, Seoul will allow U.S. carmakers to export 50,000 vehicles that meet U.S. safety standards to Korea annually even though they do not comply to local standards. It is up from 25,000 vehicles previously.

Seoul will also apply eased vehicle emissions standards for U.S. vehicles imported from 2021-25. U.S. automakers have complained that environmental regulations have been used as a non-tariff barrier for their cars.

“The government needs to gradually ease regulations regarding safety and emissions standards for domestic carmakers to offer a level playing field,” the Korea Automobile Manufacturers Association said in a statement.

The tentatively revised trade pact is subject to a final signing by the two nations and needs to be ratified in the National Assembly before it takes effect.

In return for Seoul’s concessions in the auto sector, Washington offered steel tariff exemptions to Seoul. It allowed Seoul to receive a quota of 2.68 million tons of steel exports, or 70 percent of its annual steel exports to the U.S. from 2015-2017, which will be exempt from the 25 percent tariffs on steel products.