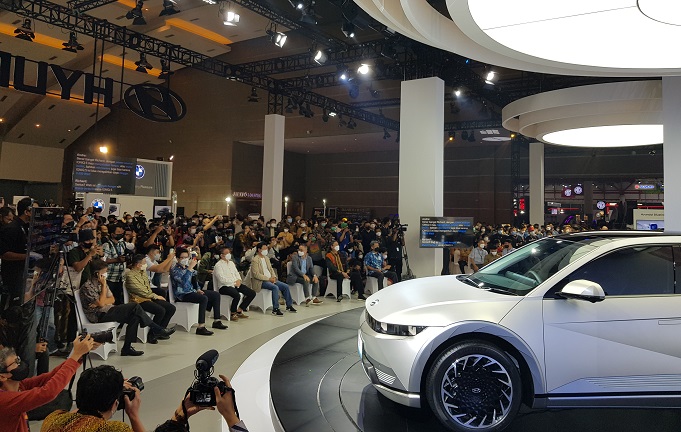 Hyundai Motor’s all-electric IONIQ 5 is presented in a showroom at the 2022 Indonesia International Motor Show that ran from March 31-April 10 in the Southeast Asian country, in this photo provided by Hyundai on May 1, 2022.

SEOUL, May 1 (Korea Bizwire) — Hyundai Motor Co., South Korea’s biggest carmaker, said Sunday it received more than 1,500 orders for its all-electric IONIQ 5 in Indonesia, less than a week after releasing the prices.

Hyundai Motor received 1,587 orders for the IONIQ 5 in Indonesia from April 22-27, more than doubling overall electric vehicle sales in the Southeast Asian country last year, the company said in a statement.

For all of 2021, carmakers operating in Indonesia sold a total of 693 EVs in the country, with Hyundai’s IONIQ Electric and Kona Electric models accounting for 87 percent, or 605 units, Hyundai said, citing data from Indonesia’s automotive industry association.

The company unveiled the IONIQ 5 at the Indonesia International Motor Show held from March 31 to April 10 before receiving the orders.

The Indonesian automobile market has long been dominated by Japanese carmakers which currently claim a whopping 95 percent stake in the market.

To change the market landscape, Hyundai has focused on promoting its all-electric models.

Last month, Hyundai said it will produce the IONIQ 5 in Indonesia. It completed a 150,000 unit-a-year plant in the Deltamas industrial complex near Cikarang, 40 kilometers east of Jakarta, in December.

Hyundai’s other E-GMP models include the IONIQ 6 sedan and IONIQ 7 SUV set to be released this year and in 2024, respectively. 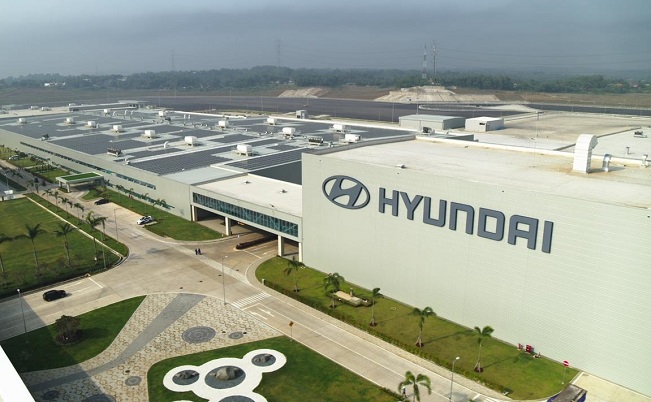 This file photo provided by Hyundai Motor shows its plant in Indonesia.

The Indonesian plant is already producing the compact Creta SUV, a strategic model for the region, and is expected to churn out the Santa Fe SUV in the first half and a small multi-purpose vehicle in the second half, Hyundai said.

Most of the vehicles to be produced in the plant will be sold in Indonesia and exported to Association of Southeast Asian Nations markets, it said.

Hyundai said it plans to invest 1.92 trillion won in the plant and increase its output capacity to 250,000 units.

The maker of the Sonata sedan and the Santa Fe SUV said it will help the Indonesian government in its plans to convert 130,000 units of public vehicles to electric ones by 2030.

“I hope that this IONIQ 5 from Hyundai will become an important milestone in the development of Indonesia’s electric vehicle ecosystem, and further accelerate the electric car ecosystem that is more advanced,” Indonesian President Joko Widodo said in the plant’s inauguration ceremony in Cikarang on March 16.

It has seven domestic plants — five in Ulsan, one in Asan and one in Jeonju — and 11 overseas plants — four in China and one each in the United States, the Czech Republic, Turkey, Russia, India, Brazil and Indonesia. Their combined capacity reaches 5.65 million vehicles.