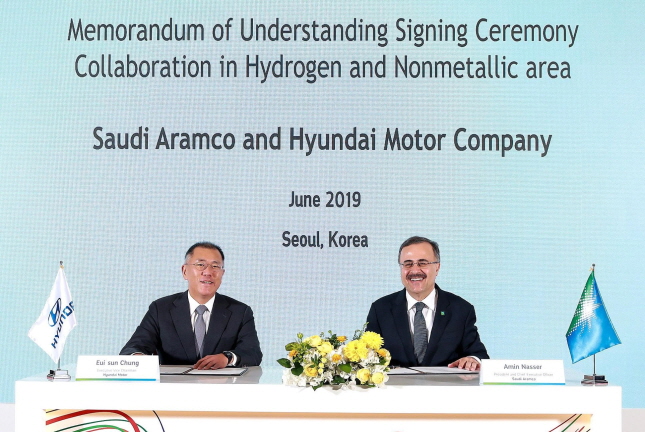 “The collaboration of Hyundai and Saudi Aramco will accelerate progress toward a hydrogen-powered society by expanding access to a robust hydrogen infrastructure and hydrogen fuel-cell electric vehicles,” Chung said in the statement.

The Saudi Aramco official said the partnership with Hyundai is an important initial step to achieve additional joint businesses.

Under the partnership, the two companies will cooperate in establishing hydrogen charging infrastructure in South Korea and supply hydrogen fuel-cell electric cars in Saudi Arabia, the statement said.

South Korea plans to increase the number of hydrogen fuel-cell electric passenger cars to nearly 6,400 this year from 890 units last year as it strives to promote hydrogen vehicles amid stricter regulations on gas-guzzling and diesel-powered vehicles.

Hyundai has strongly pushed the hydrogen initiative as it seeks to secure a new growth driver. It has developed the Nexo hydrogen car, which is available in the market.

“The two companies will also team up to expand the adoption of non-metallic materials across a wide range of applications (in vehicles), including the use of carbon fiber and carbon fiber-reinforced plastic,” it said.