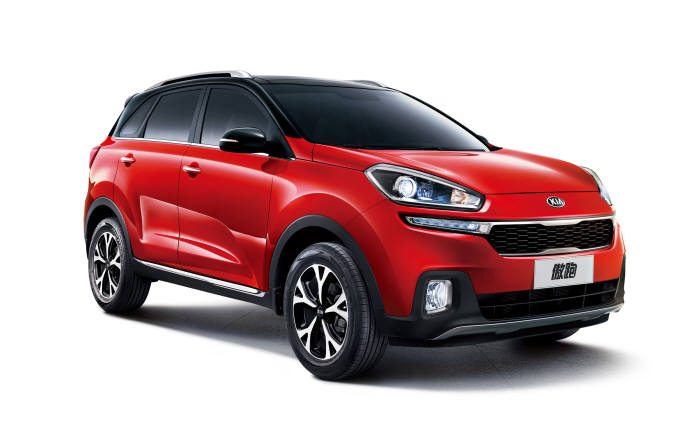 Hyundai and Kia are currently selling nine SUV models in China, including Hyundai’s ix25 (Creta) compact SUV and Kia’s KX3 (above), which make up 35.6 percent of the duo’s total sales in the country, an increase from 27 percent last year. (image: Hyundai)

The Chinese government has grown more sensitive to environmental concerns in recent years, and has set out various policies to boost the market for green vehicles.

In the face of China’s rapidly growing market for green vehicles, Hyundai and Kia have been expanding their eco-friendly lineups.

Hyundai started manufacturing the Sonata Hybrid at its Beijing plant starting in May, whereas Kia also began local production of the K5 Hybrid in August. Hyundai plans to establish four eco-friendly platforms – hybrid, plug-in hybrid, EV, and FCEV – to launch nine new models by 2020, while Kia will also be strengthening its position as an eco-friendly automaker by expanding its lineup, including the K5 Plug-in Hybrid.

The SUV market is another sector that Hyundai and Kia are actively targeting.

According to company officials, SUVs have grown extremely popular in the Chinese market, accounting for 38.3 percent of total industry demand (as of August), with an increasing number of consumers preferring larger, more spacious vehicles over similarly-priced sedans.

Hyundai and Kia are currently selling nine SUV models in China, including Hyundai’s ix25 (Creta) compact SUV and Kia’s KX3, which make up 35.6 percent of the duo’s total sales in the country, an increase from 27 percent last year.

A connected car system is among Hyundai’s youth-targeting strategies.

Hyundai Motor, for instance, featured Apple’s CarPlay and Baidu’s CarLife for the first time in its Tucson SUV, and has since expanded the systems to other models including the Lingdong (Elantra) and Mingtu (Mistra).