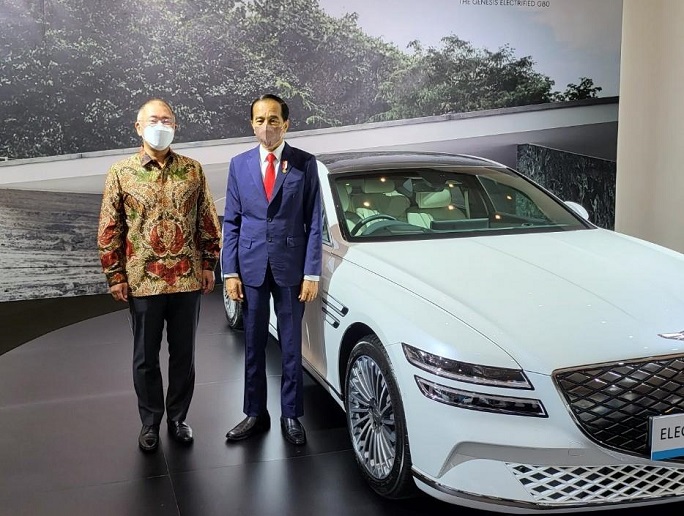 Chung Eui-sun (L), chief of South Korea’s Hyundai Motor Group, and Indonesian President Joko Widodo pose for a photo next to the carmaker’s electrified Genesis G80 sedan in Jakarta on Oct. 25, 2021, during an event to mark Hyundai’s bid to help the Southeast Asian country establish the infrastructure for electric vehicles as part of its expansion strategy. (Yonhap)

“Hyundai plans to participate in the Indonesian government programs to develop the EV infrastructure and utilize used car batteries in terms of technologies,” Chung said in a ceremony attended by Indonesian President Joko Widodo at the Jakarta International Expo convention center.

Hyundai displayed its electric models such as the electrified Genesis G80 sedan, the IONIQ 5 equipped with the group’s own EV-only electric-global modular platform (E-GMP) during the “Future EV Ecosystem for Indonesia” event in Jakarta.

Hyundai plans to introduce the IONIQ 6 next year and the IONIQ 7 large SUV in 2024.

The move is in line with the company’s plans to secure a leading position in Indonesia’s future EV market and expand into Asia-Pacific markets as a future mobility solutions provider.

Indonesia has recently announced only electric vehicles will be available in the domestic market from 2050.

Hyundai is building a vehicle plant in Indonesia with a plan to start production early next year. The plant’s output capacity will be released later.

Currently, it has seven domestic plants — five in Ulsan, one in Asan and one in Jeonju — and 10 overseas plants — four in China and one each in the United States, the Czech Republic, Turkey, Russia, India and Brazil. Their combined capacity reaches 5.5 million vehicles.