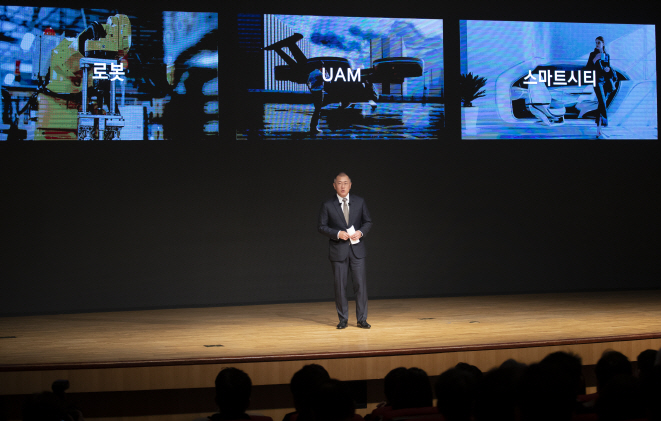 SEOUL, Jan. 2 (Korea Bizwire) — South Korea’s Hyundai Motor Group said Thursday it will invest more than 100 trillion won (US$87 billion) in the next five years to increase its presence in the future mobility markets.

“We are planning to launch 44 electrified vehicles, including 11 all-electric models, by 2025, as we aim to take the lead in electrified car markets based on the development of our own platforms and core electrified car components,” Hyundai Motor Group Executive Vice Chairman Chung Euisun said in a New Year speech held at the group’s headquarters in southern Seoul.

In 2019, Hyundai Motor Group sold 24 kinds of electrified models in global markets, and it plans to expand the lineup to 13 gasoline hybrid, six plug-in hybrid, 23 all-electric and two hydrogen fuel-cell electric models by 2025, the company said in a statement.

The maker of the Sonata sedan and the Santa Fe SUV said last month it will spend 41 trillion won on the existing business and 20 trillion won on new technology in a bid to transform itself into a “smart mobility solutions provider.”

In a town hall meeting with 1,200 executives and employees at the group’s headquarters in Seoul in October, Chung said the company will remain an automobile manufacturer but will focus on becoming a future mobility solutions provider in addition.

“Carmakers are competing in oversupplied global markets, and many of them will disappear over time. In the future, traditional vehicles are likely to account for 50 percent (of the market), with private air vehicles and robotics taking up 30 percent and 20 percent, respectively,” he said.

Hyundai Motor and its affiliates have been racing to increase investments in next-generation vehicle technologies through partnerships with overseas startups.

The investment is aimed at mass-producing Level 3 autonomous driving systems by 2021. LiDAR is a key component in the overall sensing package required to make autonomous cars a reality.

In related efforts, Hyundai Mobis joined Hyundai Motor and Kia Motors Corp. in September to invest a combined $2 billion in a 50:50 joint venture with Ireland-based autonomous vehicle startup Aptiv to develop a self-driving platform with Level 4 to 5 autonomous technology by 2022 and supply it to global carmakers.

The $4 billion joint company, to be headquartered in Boston, will be set up this year.

The company introduced a Level 4 self-driving automation technology in its concept M.VISION at the Consumer Electronics Show in Las Vegas in January last year.