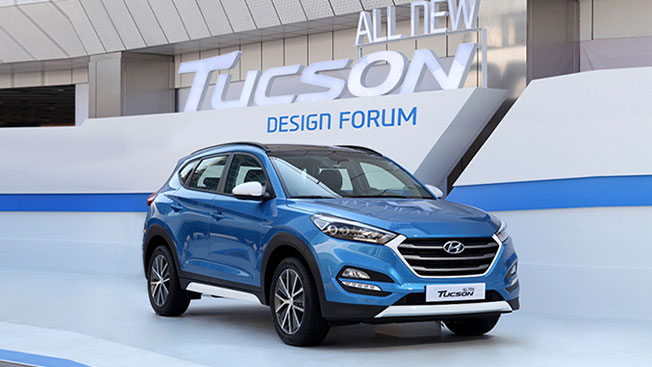 The latest version of the Tucson compact SUV was launched in March here, appealing to customers with improved designs, more space, and better power and fuel efficiency. It has not been launched yet in major overseas markets, including in the U.S.

“The Tucson SUVs started to be produced for overseas sales last month and can be unloaded into the North American market late this month at the earliest, and its sales will fully start in July,” the Hyundai Motor official said.

The automaker aims to sell about 90,000 units of the all-new Tucson annually in the North American market. It is more than twice as many as the 47,000 units it sold in the U.S. last year.

Hyundai Motor also reportedly plans to start selling the Tucson in Europe and China as well during the second half of the year.

The move comes as demand for SUVs in the U.S. is fast growing, boosted by low gas prices.

Hyundai Motor has been struggling there, however, apparently due to a lack of new cars and SUV models available to local customers.

Hyundai Motor’s sales in the U.S. shrank 10.3 percent on-year in May, and the sales of its SUV models, in particular, plummeted 22.5 percent over the same period, industry data showed.