“In a situation where our economy is in danger of sinking deeper into a recession, we should make sure the whole state affair is not held hostage by the current squabbling. The mere fact that the whole state is shaken up by preposterous rumors that may appear on yellow journalism papers is shameful and lamentable.”

“This is like one media outlet reporting an unverified story and all other media outlets amplify the story this way and that with abandon. I’d like to ask you to stay calm and watch what the Prosecutors’ Office will say about it after thorough investigations. I won’t be upset by these malicious rumors and I have strong will to stay the course. I’ve lived my whole life for the state and the people and I will be like that for the rest of my life.”

—Park Geun-hye, current President of the Republic of Korea

“If you listen to what other people say with open mind, you could be wise. If you don’t, you get thick-headed. That’s what Wei Zheng, who served as a chancellor for Tang’s Emperor Taizong for 13 years, said 14 centuries ago. Even during the time of despots, kings often listened to people’s voices. What do you think is the main cause of the controversy surrounding the leak of secret documents from the Presidential Palace? Can Ms. Park take the advice of Wei Zheng?” 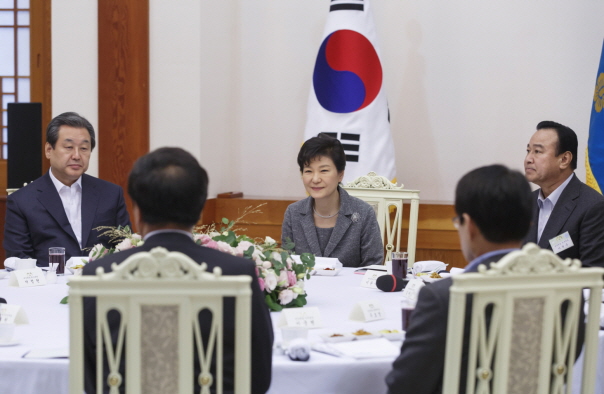 SEOUL, Dec. 8 (Korea Bizwire) — President Park Geun-hye said on December 7 in a luncheon meeting with ruling party leaders that the recent controversy over an unofficial group of advisors secretly controlling the top state management affairs, “The mere fact that the whole state is shaken up by preposterous rumors that may appear on yellow journalism papers is shameful and lamentable.”

To this, the opposition party and non-governmental advocacy groups criticized the President for making inappropriate remarks, especially at a time formal investigations are under way.

On the same day, the opposition party New Politics Alliance for Democracy floor spokesperson Rep. Seo Young-kyo said, “The remarks of the President today effectively provided a guideline along which the New Frontier Party and the Prosecutors’ Office are to follow, instead of making heart-felt apologies for allowing invisible policy advisors to muddy the water by wielding absolute power.

Park Chan-jong, former Presidential candidate and human rights lawyer and currently working as a current affairs commentator, said in an interview with the YTN news channel, “There was a eunuch named Zhao Gao who conspired to seize power upon death of Emperor Qin. He served the first emperor’s son Hu Hai and one day he tested loyalty of all officials in front of the second emperor by bringing a deer and calling it a horse.”

“The emperor laughed and said, ‘Is the chancellor mistaken, calling a deer a horse?’ Afterward, Zhao had every official who said it was a deer in front of the emperor executed. Thereafter the officials were all terrified of Zhao and never questioned his judgment. This is exactly what’s going on now in Korea’s Presidential Palace.”