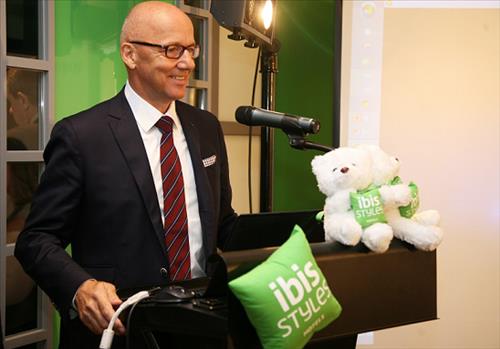 Patrick Basset, Asia-Pacific chief operating officer for Accor, said major Asian markets have shown double-digit growth over the past years and still have more room for expansion in the budget hotel segment.

“Asia-Pacific is a very dynamic market. This had the biggest growth of our portfolio in the world, and more than 50 percent of our portfolio for Accor worldwide was built in this region,” Basset said during an interview with Yonhap News Agency on the sidelines of an opening ceremony for a new Ibis hotel.

Accor, the world’s sixth-largest hotel group known for the Ibis and Novotel chains, operates 3,700 hotels with a total of 470,000 rooms worldwide. It has 16 hotels in five major cities in South Korea. On Wednesday, Ibis opened its first styles chain in Myeongdong, the famous shopping district in central Seoul crowded with Chinese and Japanese travelers.

“Seoul is one of the top tourist destinations in Asia and a strategic market for us. We’re seeing a solid growth in the number of guests staying in our hotels throughout the country amid strong demand for quality, yet affordable accommodation in Seoul,” Basset said.

Styles hotels are meant for design-centric, tech-savvy travelers, one of the fastest growing segments in the international hospitality scene. They also provide an alternative for motel customers by creating a boutique hotel-like atmosphere.

Korean motels had been widely used as covert places for couples seeking to elude public scrutiny in a society where sex and romantic liaisons are anything but an open subject. Amid fierce competition, however, motels in hip and trendy neighborhoods are transforming guest rooms into private entertainment places with wide-screen TVs and other high-tech gadgets to attract clients.

“This type of hotel is exactly targeting this kind of people who used to stay in motels, but today they want more comfort, better food and a good bed,” Basset said. “It’s a quite tight space, but it’s comfortable. It’s nice and trendy.”

While American budget hotel chains, such as Best Western and Holiday Inn, hold a firm foothold in their home turf, Accor’s international portfolio, especially in the fast-growing Asia-Pacific region, has presented a stronger performance by working with local partners to combine expertise to provide quality services, Basset said.

“We have a good international representation of our brands. We adapt to the local culture if we need to and we’re also driven by innovation,” he said.