“IKEA sells not only furniture but also other household products, but it is categorized as a specialty shop for furniture under the current law. Under these circumstances, it is not regulated with regards to operation hour restrictions or forced closures like other big box retailers, which causes controversy in the aspect of fairness.”

“Due to a foreign company camouflaged as a furniture shop in name, the whole business district of Gwangmyeong is dying. In order to protect small and medium sized retailers not only in Gwangmyeong but across Korea, I proposed the amendment of the Distribution Industry Development Act.”

“IKEA Gwangmyeong cannot be seen as a furniture shop as some 60 percent of its items are home products, including daily necessities, and only 40 percent are furniture items. We welcome the so-called “IKEA Regulation Bill,” the amendment proposal of the Distribution Industry Development Act, as it prepares a tool to protect small retailers.”

“In addition, the government needs to make additional regulations like forced closures and operation hour regulations to other big retailers, which cause a great deal of damage to neighboring business districts and traditional markets.” 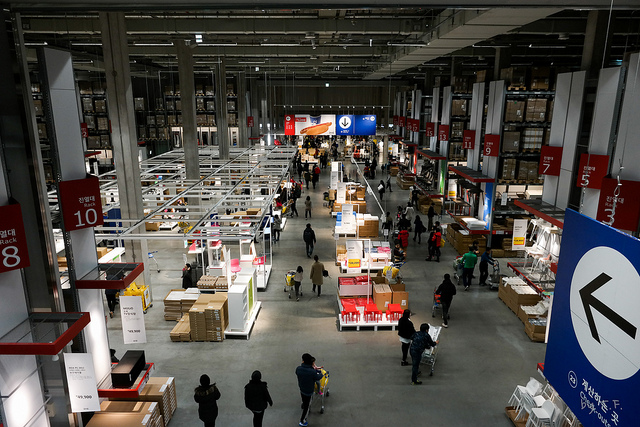 Under the existing law, IKEA is categorized a specialty shop selling furniture, not a wholesale distributor, so it is excluded from regulations such as forced closures every other weekend and limited operating hours. (image: TF-Urban/flickr)

SEOUL, Jan. 15 (Korea Bizwire) — It is expected that Swedish furniture giant IKEA would be imposed a mandatory shutdown as the National Assembly will revise the Distribution Industry Development Act which will offer a legal basis for IKEA to be regulated like other big box retailers.

On January 14, Lawmaker Shon In-chun of the ruling Saenuri Party, along with 11 other lawmakers, proposed the revision of the law to expand its regulation categories to specialty shops from big box retailers like E-Mart, Home Plus and Lotte Mart.

Under the existing law, IKEA is categorized a specialty shop selling furniture, not a wholesale distributor, so it is excluded from regulations such as forced closures every other weekend and limited operating hours.

However, among some 9,500 items being sold by IKEA Korea, only 40 percent are furniture items and the majority of them are household goods like food and other daily necessities. In addition, IKEA rented one of its two buildings to Lotte Shopping, which opened an outlet there, and this added to the controversy.