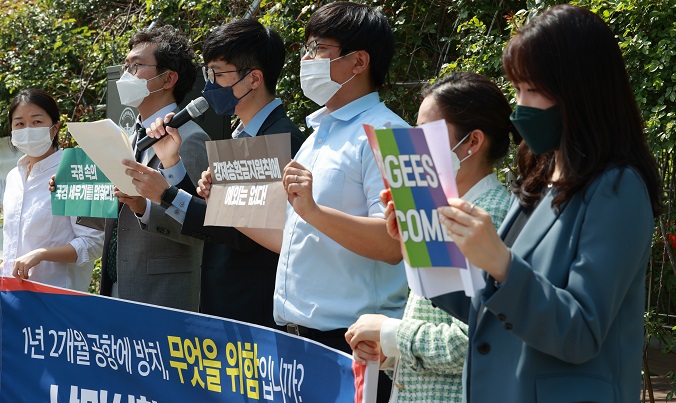 This April 21, 2021, file photo shows members of the Korea Refugee Rights Network holding a news conference in front of the Seoul High Court after the court dismissed the Incheon International Airport immigration office’s appeal against a lower court ruling that deemed its rejection of an African man’s refugee status application unlawful. (Yonhap)

SEOUL, May 17 (Korea Bizwire) — A court decision against the immigration office’s refusal to review a refugee status application from an African man has been finalized, court records showed Monday.

The Seoul High Court on April 21 dismissed the Incheon International Airport immigration office’s appeal against a lower court ruling that deemed its rejection of the asylum seeker’s application unlawful.

The decision was confirmed as the agency under the Justice Ministry did not appeal to the Supreme Court until the deadline of May 12.

The African man said he fled his country after about 10 family members and friends were killed amid political persecution. He took a flight with a layover in South Korea and arrived at the airport in Incheon, 40 kilometers west of Seoul, on Feb. 15, 2020.

He spent 14 months at the airport with assistance from pro bono lawyers and citizens.