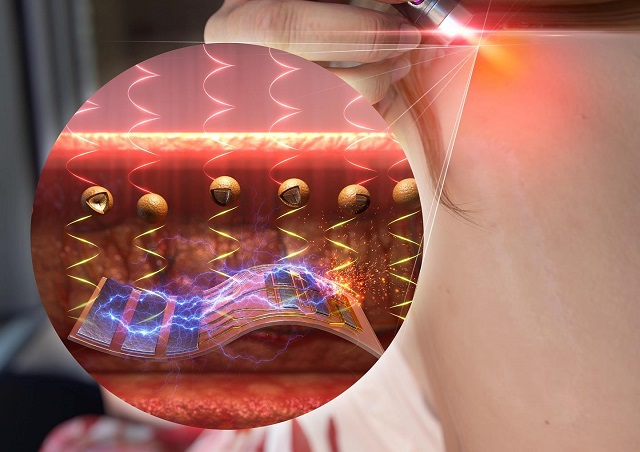 This photo provided by POSTECH shows how its drug delivery system works.

POHANG, March 10 (Korea Bizwire) — A new-concept in-body drug delivery system has been developed in which a body-implanted medical device automatically injects drugs when it is exposed to light energy.

A research team from the Pohang University of Science and Technology (POSTECH) said that it had developed an automatic control-type in-body drug delivery system using a photovoltaic power generation element that is composed of coated up-conversion nanoparticles.

The development of the automatic drug delivery system, through which drugs are automatically injected for individuals suffering from chronic diabetes who need to be medicated on a regular basis, had significant restrictions in terms of size and shape primarily due to the limits of the power source.

The research team found the answer in photovoltaic energy.

It employed the principle of inducing photovoltaic effect by turning a photovoltaic power generation element that transmits power to a medical device within the body into up-conversion nanoparticles and making use of near-infrared light to penetrate the skin.

The up-conversion nanoparticles amplify the energy within the object when exposed to a small amount of light energy.