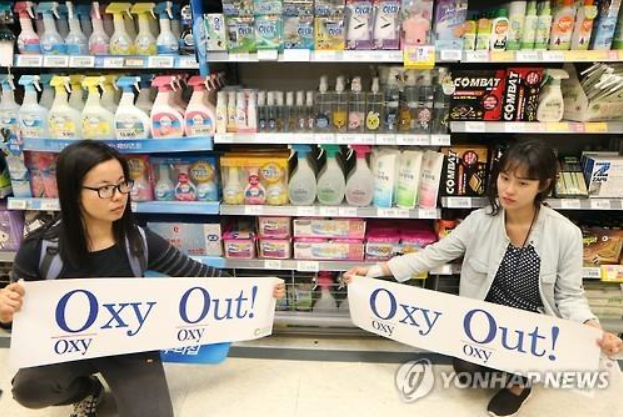 Households with children have displayed particularly high sensitivity to this issue as parents are choosing alternatives to chemical household products, using all-natural detergents instead of chemical detergents and purchasing gauze towels instead of wet wipes. (image: Yonhap)

SEOUL, May 5 (Korea Bizwire) – With the recent controversy over humidifier disinfectants, consumers are becoming increasingly mistrustful of household products that include chemicals. As there were no regulations regarding these products for more than 10 years between 2001 and 2011, there is no way of identifying whether toxic substances are present in the various chemical household products currently being sold in the market.

According to a recent survey on biocide by the Ministry of Environment, several distribution companies have already experienced a decline in sales of their air fresheners, insecticides, and detergents.

Households with children have displayed particularly high sensitivity to this issue as parents are choosing alternatives to chemical household products, using all-natural detergents instead of chemical detergents and purchasing gauze towels instead of wet wipes.

“After the humidifier disinfectant controversy, I am reluctant to use even detergents for cleaning the bathroom,” said Jae Geum Park (age 57), a homemaker in Seoul.

“I no longer trust any household products after the humidifier disinfectant controversy. I have to use a humidifier because of my child’s asthma, but I use baking soda when cleaning, not disinfectants,” said Min Ju Kim (age 32), a mother of a one-year old child.

“I will be using baking soda and all natural detergents as much as possible,” said Jung In Chae (age 32), who has two children under the age of three. “I try to avoid using sprays like mosquito repellants and hairspray as much as I can.”

Reflecting this consumer mentality, several online shopping malls have been selling natural detergent sets such as ‘Baking Soda, Citric Acid, and Hypercapnic Soda”, and others. These products are known as 100 percent natural detergents that can take the place of existing detergents and deodorants when properly used.

Household product manufacturers initially claimed that their products pose no danger to safety, but they are becoming more concerned about how the current consumer mentality against household products will influence sales.

“We are making efforts to comply with the government’s safety regulations by excluding toxic ingredients as much as possible when we manufacture our household products,” said an official from Aekyung Corporation. “As domestic consumers’ sensitivity to household products continues to increase, we will be closely attentive to how sales trend develop from now on,” he added.