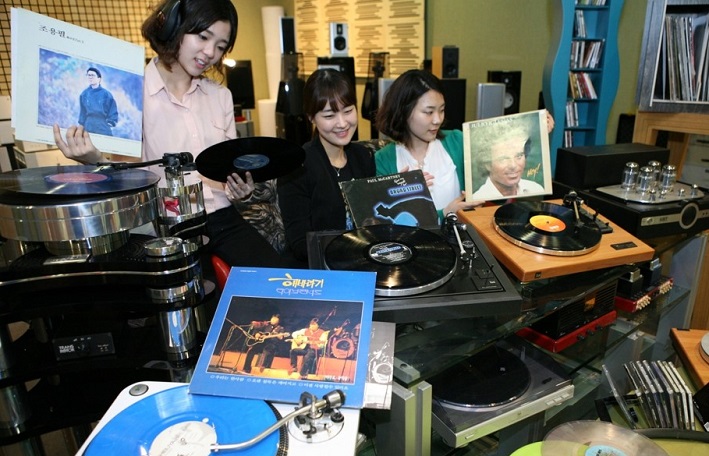 Customers enjoy music through LP records playing on a turntable at a shop in I’Park Department Store in Yongsan, central Seoul. (Yonhap)

Gmarket, a major online shopping mall, reported a 30 percent increase in turntable sales in the former half of this year compared to the same period last year.

Sorted by age, the rate of sales increase was mostly seen among those in their 50s (41 percent) and 40s (31 percent), followed by more than 10 percent among customers in their 20s or 30s.

In the same period, another online mall SSG.com reported a 44 percent increase in turntable sales.

The Music Content Association reported a sales increase of vinyl albums, limited to K-pop, by a factor of 19 in the first half of this year.

The popularity of turntables and LP records is driven by the qualities of ‘sensibility’ and ‘mood’ they portray.

“Buying a vinyl album gives you this sense of ownership,” music critic Kim Do-heon said. “More people are enjoying collecting LP records and placing the needle on the turntable,”

With deepening interest in indoor decoration, consumers are also buying more LP records and turntables as props for interior design, he added.