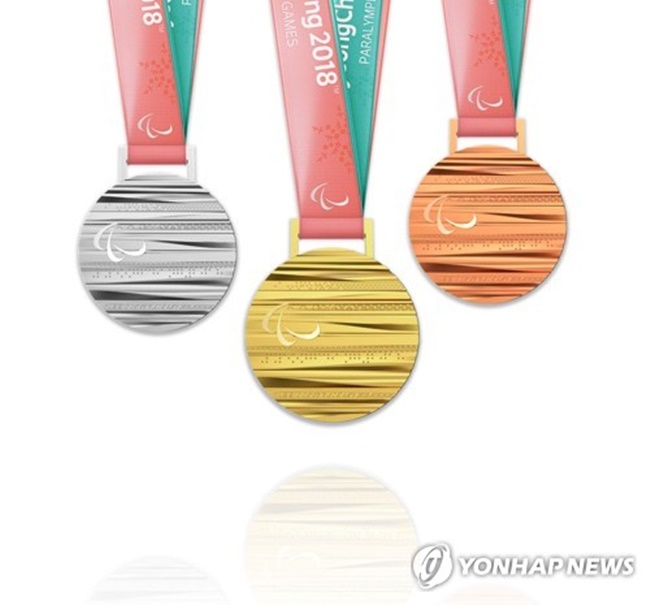 SEOUL, Dec. 11 (Korea Bizwire) – Medals to be awarded at the 2018 PyeongChang Winter Parlympics were unveiled Monday, with a nod to the Korean culture and traditions.

The competition’s organizing committee said the Paralympics medals are based on the same design principles of the medals for the Winter Olympics, in that both have been inspired by the Korean culture and its alphabet, hangeul. Lee Suk-woo, a South Korean industrial designer who designed the Olympic medals, also produced the Paralympic medals.

The Paralympics will take place from March 9 to 18.

The medals are 92.5 millimeters in diameter and 9.42 millimeters in width. They have the hangeul consonants of the words PyeongChang 2018 Paralympic Winter Games engraved around the edge. Traditional patterns, including clouds, mountains, wind and wood, each symbolizing the nature of PyeongChang and its home province of Gangwon, grace the obverse.

The Paralympic Games’ symbol of three agitos are on the front side of the medal, with the Paralympics’ logo and the name of each sport featured on the back.

The Paralympic medals’ lanyard has much the same design as that forthe Winter Olympics, in that both have snowflake patterns embroidered on “Gapsa,” a type of cloth used in the traditional Korean dress of hanbok. Light teal and light red were used in consistency with the look of the quadrennial competition.

The curved pattern of the medal case was inspired by the Korean traditional beauty, the organizers said.

At the PyeongChang Paralympics, 133 sets of medals will be awarded across six sports and 80 events.

“The Paralympic Winter Games medals for PyeongChang 2018 are a symbol of equality, creativity, culture and passion,” said Lee Hee-beom, the top organizer of the competition. “The work that has gone into the design and manufacturing of the medals has been world class, and we are all looking forward to the moment when the first medal will be awarded to the world’s best Paralympic athletes next year.”