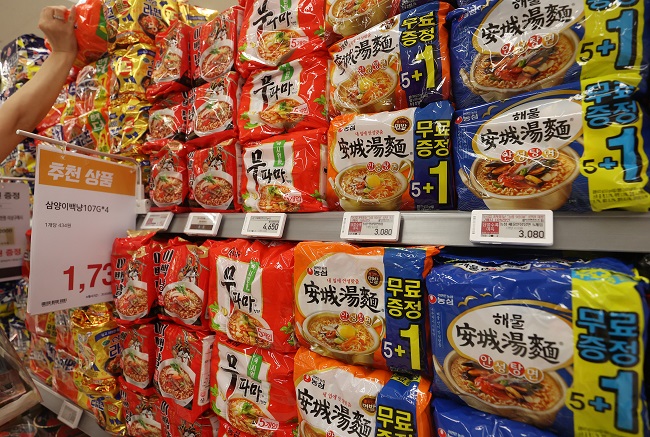 Nongshim Co. said its sales of instant noodles, or “ramyeon” in Korean, came to 2.09 trillion won (US$1.85 billion) last year, up 16.3 percent from the previous year, according to the data from the Financial Supervisory Service.

It marks the first time for Nongshim’s ramyeon sales to top the 2 trillion-won mark and the amount accounted for 79 percent of the company’s total top line.

Nongshim said overseas demand was strong for its flagship Shin Ramyun and Chapaguri, a signature noodle dish from the Oscar-winning film “Parasite.”

Shin Ramyun is a spicy brand, and Chapaguri is a mixture of Chapaghetti, instant black bean noodles, and Neoguri, spicy Korean udon-like noodles.

Ottogi Co. said sales of its instant noodle and other noodle products rose 8.4 percent from a year earlier to 700 billion won, in a turnaround from a 0.8 percent decline in 2019.