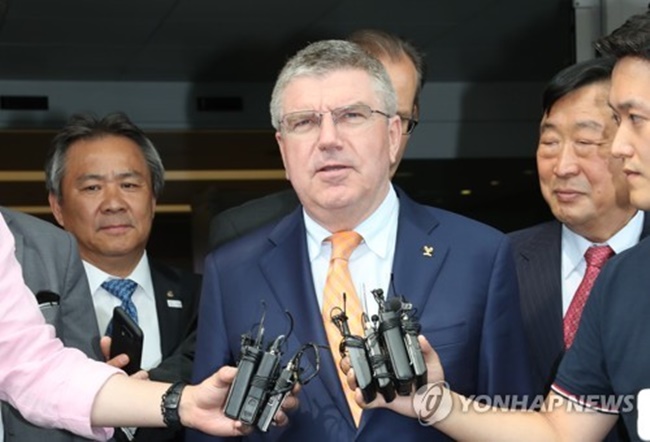 INCHEON, June 29 (Korea Bizwire) – International Olympic Committee (IOC) President Thomas Bach on Thursday expressed his support for a South Korean proposal for a unified Korean delegation to next year’s Winter Olympics here, saying the idea is “in the spirit of the Olympism.”

His trip comes less than a week after South Korea reached out to North Korea to participate in next year’s PyeongChang Winter Olympics.

“(Moon’s initiative) is in the spirit of the Olympism,” Bach told reporters at Incheon International Airport. “The Olympic Games are about understanding; they’re about dialogue, and they’re about peace as much as they are about competition.”

The two Koreas remain technically at war because the Korean War ended in 1953 on an armistice, not a peace treaty.

North Korea’s lone IOC member, Chang Ung, has been in South Korea since last Friday with a delegation from the North-led International Taekwondo Federation (ITF), whose demonstration team performed in the opening ceremony. Over the past week, Chang has been peppered with questions about Moon’s proposal, and he has mostly deferred them to the IOC, saying it wasn’t simply a matter to be decided by the two Koreas.

All talks of a joint team could be moot, however, if North Korea doesn’t have any qualified athletes.

North Korea hasn’t been nearly as successful in Winter Games as in Summer Olympics, and for PyeongChang 2018, it has its one last shot in pairs figure skating. Ryom Tae-ok and Kim Ju-sik just missed out on qualification at the International Skating Union (ISU) World Figure Skating Championships in Helsinki, and will take one more crack at an Olympic berth at the Nebelhorn Trophy in Oberstdorf, Germany, in September. Four last spots will be up for grabs.

Bach said the IOC already invited the North to take part in the PyeongChang Games back in February.

“We’re supporting their athletes in order to qualify for the Games,” Bach added, hinting that the IOC may grant North Korean athletes some “wild card” slots if none qualify for PyeongChang.

The Koreas have fielded joint teams two international competitions — the 1991 World Table Tennis Championships and the 1991 FIFA World Youth Championship — but never at an Olympics.

Sports exchanges have been virtually non-existent in intervening years under conservative administrations in Seoul. In April this year, a month before Moon was elected, the South Korean women’s football team played in Pyongyang for the first time and held the heavily favored North Korea to a 1-1 draw at the qualifying event for the 2018 Asian Football Confederation (AFC) Women’s Asian Cup.

During the taekwondo competition, talks of merging the WTF and the ITF have also gained traction. The WTF, headquartered in Seoul with South Korean Choue Chung-won as president, is the official world governing body of taekwondo, as sanctioned by the IOC. The ITF, with North Korean Ri Yong-son at the helm, is based in Vienna.

The two organizations have different sets of rules, but signed a cooperative agreement in August 2014 to promote exchange programs.

The ITF is visiting South Korea for the first time in 10 years. Its demonstration team’s performance in last week’s opening ceremony was the ITF’s first show at a WTF event held in South Korea.