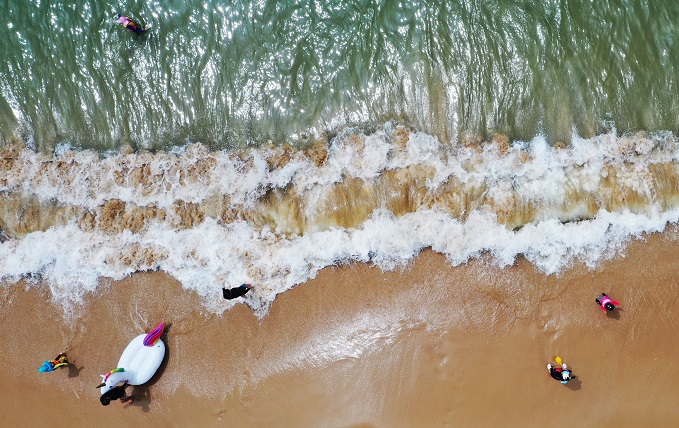 Myeongsasimni Beach’s sandy area can accommodate up to 124,000 people per day. (Yonhap)

Among them is Myeongsasimni Beach in Wando County, South Jeolla Province, which has a 570,000 square meter sandy area.

Myeongsasimni Beach is now enjoying a rising popularity as it enables easy and comfortable social distancing. The number of people visiting the beach has increased sharply compared to previous years.

The beach’s sandy area can accommodate up to 124,000 people per day even if the Ministry of Oceans and Fisheries’ COVID-19 guidelines are strictly applied.

In the past, the beach’s daily visitors numbered less than 10,000, even during the summer vacation season.

But today, the number of users has doubled on weekdays and tripled on weekends.

To cope with the surge in the number of visitors, local public health authorities including the county office established a three-step measure to prevent the spread of COVID-19. 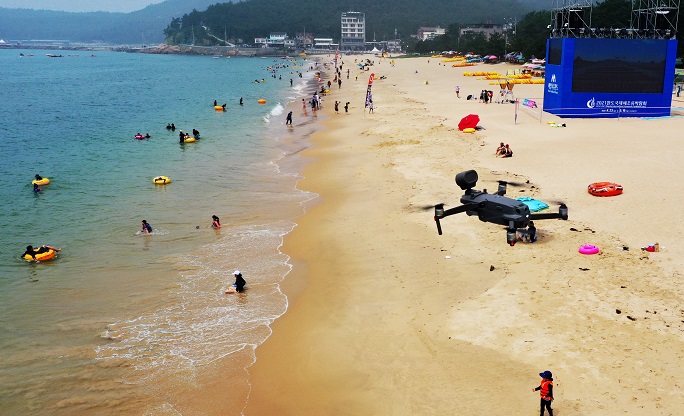 Congestion levels on the beach’s sandy area are managed using a drone. (Yonhap)

First, all visitors to Wando must have their temperature checked.

Second, beachgoers see their temperature checked again at the beach’s three entrance gates, while disinfection and sterilization work is also carried out.

Last, congestion levels on the beach’s sandy area are managed using a drone.

In particular, the county has become the first of its kind in South Korea to implement a system that makes used of drones designed for disaster relief to check the temperatures of beachgoers.

Several trial operations have already been completed. The drone temperature check program will be officially launched after necessary equipment is arranged and a program that can track those who have high fever is developed.