SEOUL, March 16 (Korea Bizwire) – The Oscar-winning Korean film “Parasite” has been re-released in South Africa and has been gaining popularity for more than a month.

Despite the frequent mention of Korea in the South African media due to the spread of the novel coronavirus, Korean films that have been recognized for their work worldwide are warming the hearts of South African spectators living on the other side of the globe.

According to local distributor IXPE, “Parasite” first opened in 18 out of about 100 theaters in South Africa on Oct. 11 last year. At that time, it was removed from the box office after one month, attracting little attention.

The turnaround came as “Parasite” swept four awards, including Best Picture, at the 92nd Academy Awards on Feb. 10.

Four days later, “Parasite” was seen on the screen again in eight theaters in four major South African cities, including Johannesburg and Cape Town. It is said that the movie has attracted more than 20,000 viewers so far.

It is the first time that a Korean movie has opened a theater for commercial purposes, not only in South Africa, but across the African continent.

Among Asian films including South Korea, China and Japan, it is also known to be the first commercial release in South African film history.

“It is a very popular movie,” a local movie theater employee said. “After ‘Parasite’ won the Oscar, it started becoming popular,” he said. “The audience said in unison that it was a good movie with a great story line.” 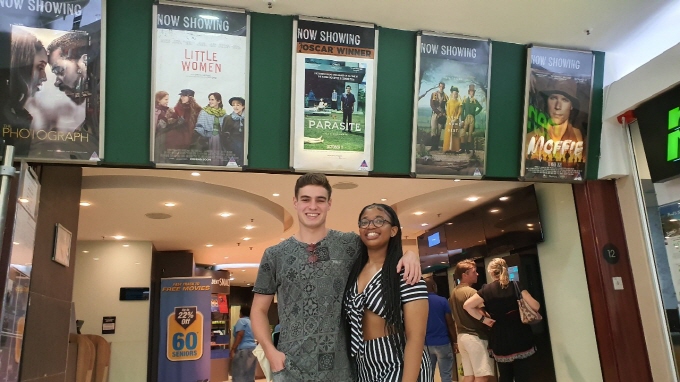 A poster of the Oscar-winning film “Parasite” is displayed at a movie theater in South Africa’s administrative capital of Pretoria on March 14, 2020. (Yonhap)

Given that South African movie-watching culture is not uncommon in theaters where one or two movie lovers are watching movies, “Parasite” is becoming popular.

In order for a film to receive acclaim in South African society, above all, it must be able to win the sympathy of black people, who account for about 80 percent of the local population.

Expensive movie tickets are one of the factors that makes movies difficult for black people to access.

The tickets to “Parasite” cost 99 South African rands (US$6,06), compared to a minimum wage of 20 rands in South Africa.

“In the South African market, which has been tough for Asian films to crack, Parasite showed that Korean movies that appeal to a wide audience could work well, even if not Hollywood blockbusters,” said Cho Chang-yeon, CEO of IXPE.